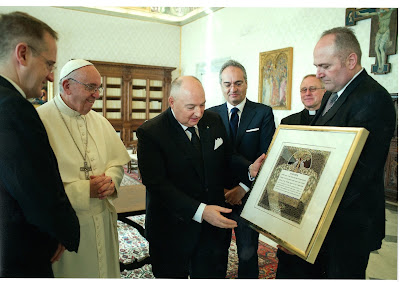 
In our previous post, never forget!, we touched upon what the members of the European Jewish Congress discussed when they visited with Francis at the Vatican on International Holocaust Remembrance Day.  One thing which slipped past us, at Call Me Jorge..., was the gift (shown above and below) which we thought was simply, as the Opus Dei staffed Rome Reports implied, a framed piece of artwork containing “a special blessing of your [Francis'] home”.   Thankfully, Tradition In Action knew what this “special Jewish blessing” is — a ketubah.


“During the visit, Kantor gave the Pope a picture, above. It is a special Jewish blessing surrounded by an illumination representing the world, a tree of life and two peacocks at its base, which represent the resurrection. The peacock tails fall down and around the Hebrew text wishing love, abundance and fertility. This Jewish custom called Ketubah is commonly given to wish protection over homes and marriages.” 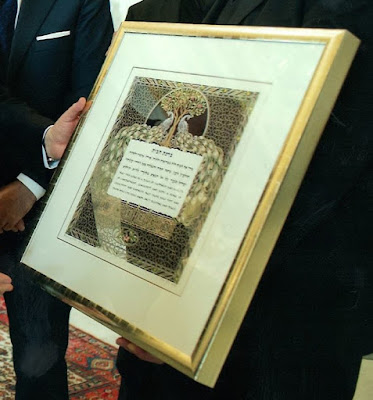 Closeup of the ketubah given to Francis.

source: The Jewish Marriage Contract: A Study in the Status of the Woman in Jewish Law by Rabbi Louis M. Epstein, page 31.


Here we have Rome Reports selling the idea to their audience that what is in reality a commercial transaction — a Babylonian marriage contract — is a “special Jewish blessing”.   Doesn’t this remind you dear readers of how usury is sold to the public?   Don’t for one second think that Francis didn’t know what he was receiving.  For Francis, “told them [European Jewish Congress delegates] that when he was a child, his parents use to receive visits of some Jewish friends, so he knows good their culture and traditions.”  This is true as we have pointed out countless times, on this blog, that Francis understands the minutiae of the man-made Talmudic religion.  He may appear on the surface to be a ‘modernist’ but underneath this veneer, Francis is a ‘rabbinic traditionalist’.  Interestingly, the Talmud is also seen by the rabbis as “the katubah, a wedding contract between God and Israel, who have entered into a kind of cosmic marriage.” (The Encyclopedia of Jewish Myth, Magic & Mysticism, 2nd Edition, by Rabbi Geoffrey W. Dennis, page 549 of the epub edition, see entry Torah)  The rabbis then use the Talmud to annul the laws of God.  As Maurice Pinay of the Maurice Pinay Blog writes,


“The ketubah is a non-biblical, rabbinic tradition. Like so many rabbinic traditions, it overturns biblical law allegedly for the purpose of 'repairing' God's alleged poor judgment. Jesus Christ vehemently opposed these traditions of the rabbis which make God's word of no effect, but today this hard fact is brushed aside with such fluffy slogans as, “Jesus was Jewish, and we appreciate his culture, where he came from.” In reality, the people who sign these ketubot form a covenant not with God but with the rabbis in their millenia-old struggle to overthrow God and His word and to put themselves in God's place and replace His word with Talmud, Kabbalah and the 'Noahide laws' of Babylon”


Returning to the commentary of Tradition In Action we read,


“We wonder whether Kantor was referring to the marriage of the Conciliar Church and Judaism. It certainly corresponds perfectly with the Russian Jew's proposal to the Pope to work together in areas of education and family. He also suggested that the Vatican hold an exhibit of Jewish art that belongs to him.”


Unable to find more than cursory video of the gift exchange we went over to photovat.com for the official photos from meeting.  On page 4 of the many photos taken (linked to below) one can see Dr. Kantor presenting Francis with the ketubah, explaining it to him, and then the two men shake hands as if they had just completed a business transaction.  Call Me Jorge... concurs with Tradition In Action’s commentary — this is the marriage of Francis’ noahide Novus Ordo and Talmudic Judaism.  Even though the intrigues and collusion go back hundreds of years it is the first time that we are aware of a symbolic marriage such as this taking place. 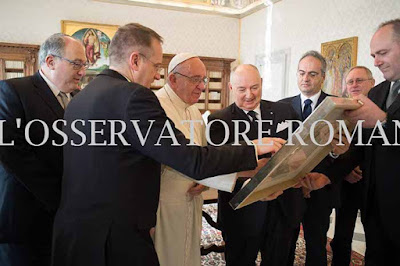 Kantor explaining to Francis the ketubah through the Vatican’s translator. 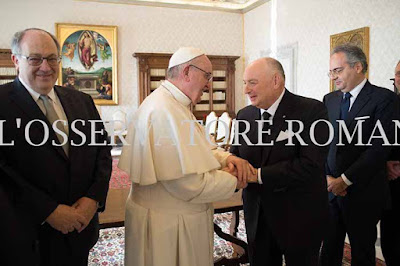 The two men shake on the Babylonian contract.

Posted by hereisjorgebergoglio at 1:25 PM