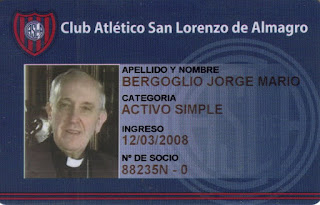 
In 1998, Jorge Bergoglio was the 61 year old archbishop of Buenos Aires and a mega-fan of the San Lorenzo football club which was then known for losing.  The following story in the video below is recounted by the then newly hired coach of San Lorenzo, Alfio ‘Coco’ Basile.

As he was the new coach, the president of the football club,  Fernando Miele, told Coco to expect a guest in the locker room before his first game, “He’s a priest who always comes to greet the players before the game.”

Coco then relates, “I did not want anyone to break the [pregame] concentration of the players, so I told Miele, ‘Throw out the priest!’”

Coco explains, “If he always comes and they haven’t beat anyone, why should he be allowed in again?  So Miele tells him and the guy leaves.”

“In April of last year I met Miele in a restaurant, he said, ‘You saw who the Pope is?’  ’No’ And he tells me: ‘that was Bergoglio, the one you threw out of San Lorenzo's dressing room.’ I'm going to visit him in Rome, that’s how I tell it.  Ha, ha,” Coco finishes the story.

Interestingly, football (soccer) is a freemasonic spinoff of the sport of rugby.  It was created by freemasons drafting the rules on 26 October 1863 at Freemason’s Tavern, Great Queen Street in London, England.

Maybe Coco could do the world a favor
and throw Francis out of the Vatican.
Posted by hereisjorgebergoglio at 12:05 PM