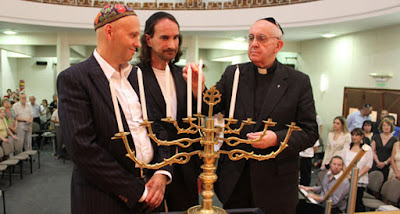 Jorge at home in the synagogue.

Both Jorges [Bergoglio & Kirzsenbaum, the president of DAIA] shook hands, and the cardinal said to the Jewish leader: "You will be our brothers in the faith, but you are our son" ... Kirzsenbaum looked at him in disarray and with a mischievous smile Bergoglio clarified : "You are not from Boca, you? Well, guess what block (neighborhood) I am ..." Any possible tension that could have been generated was diluted with the football reference to his status as a fan of St. Lawrence, since yesterday Pope Francis I. After breakfast at the AMIA, the prelate went to the Belgrano neighborhood - along with Kirzsenbaum and other leaders - to see a sample of Maimonides (the first exegete of the Torah to study the Holy Scriptures from Aristotelian logic) at the Larreta Museum.

Over the years, Bergoglio has not hidden his love and closeness with the Jewish people. In jest, with a mixture of affection and admiration, many parishioners from the temples he frequented for the High Holidays (Rosh HaShanah, Yom Kipppur) and for Hanukkah (which usually coincides with Christmas) called him "Rabbi Bergoglio". Belgrano, as it is known, houses the largest concentration of synagogues in the country.

Two of them had Bergoglio comes as a regular visitor. One, NCI Emanu-el, at Arcos Street; the other, Benei Tikvá, in Vidal Street. The Great Temple of Freedom Street also had him concurrently obliged in the festivities of the Jewish New Year and the Day of the Forgiveness. In the last celebration of Chanukah, the Feast of Luminaries (where they light candles of a nine-limbed candlestick to recall a miracle that has to do with light), Bergoglio, flanked by rabbis Sergio Bergman and Ale Avruj, was invited to light the candle corresponding to the fifth day of the celebration. "Chanukah is united in a symbol with Christmas and it is the symbol of the light, since in the story of the birth of Jesus, the angels announced the presence of the light, So the light is on both festivals.

In the case of Chanukah, it has a very specific historical meaning, but it also projects forward and gives rise to its own lights", Bergoglio explained to the parishioners gathered that afternoon-night. His closeness and friendship with Bergman (who officiates at Libertad) is as strong as the one he maintains with Abraham Skorka, of the temple of Vidal, located in a position opposite to that of today's legislator by the PRO (Propuesta Republicana, the right wing party in Argentina), at least as far as the internal community is concerned.

With "Abi" Skorka, (Jorge) shared a cable program and they are co-authors of the book "On heaven and earth", a compilation of dialogues between both religious.

Yesterday Skorka fell in praise for his friend and declared to the Jewish News Agency that he is "the pope which Christianity needs". Perhaps he was carried away by enthusiasm, and went into naturally forbidden waters for religious of other confessions.

However, what Skorka surely wanted to do was to reflect the joyful joy of the Argentine Jewish community which was caused by the selection of Bergoglio as the head of the Catholic Church. Because of his double status as an Argentine and a proud friend of the Jews.

More on the humble ‘rabbi’:

Posted by hereisjorgebergoglio at 8:49 PM