Who did Bergoglio celebrate Christmas with? — an update 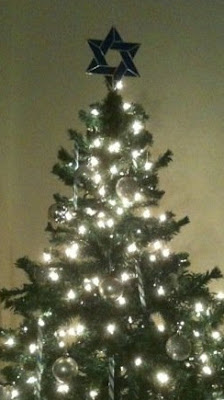 
Thanks to the reader, nazareusrex, who sent us this information.  It fills in a few more details of how Jorge Bergoglio celebrated Christmas Eve and Christmas with Talmudic Jews. (Also see: Who did Bergoglio celebrate Christmas with?)  Jorge took great care, as he did so a few years later at Casa Santa Marta when he had his rabbinical friends over for lunch, to make sure the food was kosher that night.  Fittingly, Jorge and his rabbis turned the sacristy at the Cathedral into their personal dinning room.

In recent years, Bergoglio shared Christmas Eve with Claudio Epelman, director of the Latin American Jewish Congress, and Alberto Zimerman, protreasurer of the Delegation of Argentine Jewish Associations (DAIA). After the 21 o'clock (11:00PM) Mass in the Cathedral, in which the guests and their wives were placed in the same chairs in which the presidents sit for the official ceremonies in row zero, that is, in front of the first row of the pews, the present pope shared with them a modest supper: soda and cheese sandwiches, without ham showing respect to Jewish customs. They did it in the sacristy, where toasts were held during the Te Déum, in times when they were there more frequently than now.

"It was all very simple, with no sophistication," recalled Epelman, who met Bergoglio in Aparecida, Brazil, during a meeting of the Latin American bishops in May 2007. Epelman participated in that conference as the only invited Jewish observer. "In Aparecida we bonded personally and at the end of that year it was the first time that I went to the Cathedral to greet him for Christmas. It seemed important to accompany him at that moment so important for his personal and religious life. Before Christmas, we talked on the phone and he said: "I imagine you coming here this year too, do you not also?" "

Over the years Zimerman (also) joined the curious celebration....They prepared rice with prawns, chicken matambre, stuffed eggs and salads. For dessert they ate ice cream and fruit salad and toasted with a champagne.

"It was cold food and also very simple," Epelman said. And he agreed with Zimerman to point out that Bergoglio rose to serve the wine. "If I got up, he would make me sit and touch my shoulder," said Zimerman, who admitted that tonight will miss the friendly meeting.

The collaborators at the Cathedral will also remember tonight their last Christmas with the present pope. "They are very excited. It seems impossible to have spent Christmas Eve with he who is the Pontiff today," Father Russo told the NATION.

"We knew where he'd go to do the washing of the feet on Holy Thursday, but we did not know where he went on the 25th," said a person of close relationship with the former archbishop. Other contributors confirmed that "the boss", as they called him, warned that he would not be in the house and asked his vicar general to celebrate the Christmas Mass. "We later learned that he had gone to visit prisoners in some prison, the sick in a hospital or a poor neighborhood," added the person, who asked not to be mentioned.

One of the memories that Epelman treasures is the greeting with which the night they said goodbye on the 24th. "I said, "Merry Christmas" and he answered me: "L'ejaim" , which in Hebrew means: "For life" "

Posted by hereisjorgebergoglio at 8:08 PM