Francisco Providência, “In the poster we sought to value the physical and friendly closeness of [Francis] who is smiling and waving his hand in a gesture of greeting and blessing.”


The logo, motto, and poster for Francis upcoming, 12th & 13th of May, trip to Fatima, Portugal for the 100th anniversary of the apparitions of Our Lady to the three shepherd children — Lucia, Jacinta, and Francisco — were released this past Friday.  The poster is above and below is the logo.  The designer of the logo, Francisco Providência, explained to the press, “The design intention was to convey through graphic communication, [that Francis], a messenger of mercy and peace, is as simple and accessible as the Saint who gave him his name, but also associating his visit with the Marian Shrine of Fatima, with its more universal symbols (a heart and a rosary).”  Providência didn’t explain why the rosary doesn’t have the proper number of beads however he did say,  “that the heart (instead of the cross) characterizes more the merciful love of the Father than does the redemptive suffering of the Son.”  Oh, boy...  Does anyone in the Novus Ordo church understand the Faith? 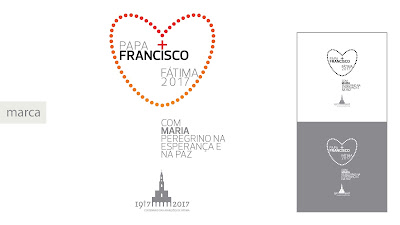 The Portuguese motto translates as, “With Mary, pilgrim in hope and in peace”


Fr. Carlos Cabecinhas the rector of the Shrine of Fatima and the coordinator of Francis trip said that the design reflects, “style of simplicity and clarity,” which characterizes Francis.  He further stated that the motto allows Francis to be united to the message of Fatima, “Peace binds us to [Francis], his pontificate and also the message of Fatima, hence this conjugation.”  As if that weren’t enough praise Cabecinhas also said of Francis‘ upcoming visit, “It will allow us to hear the prophetic voice of the [Francis].”  Francis is the antithesis of the message of Our Lady of Fatima and to call him a prophetic voice is beyond stretching it!  This is the same man that insulted Catholics who offered him a spiritual bouquet of Rosaries in 2013,  outsourced his consecration to Our Lady of Fatima to the local bishop on 13 May 2014 and then this past year honored the heresiarch Martin Luther at the Vatican on the 99th anniversary of the sixth apparition of the Blessed Virgin Mary at Fatima, Portugal.  Oh please, get real!

Posted by hereisjorgebergoglio at 8:25 AM