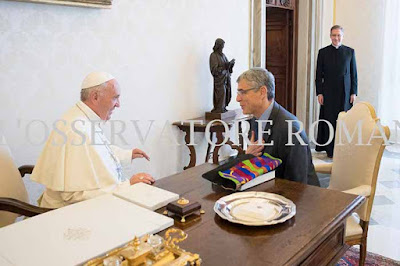 The President of the Union for Reform Judaism (URJ), Rabbi Rick Jacobs, had a private audience with Francis at the Vatican on Friday 26 May 2017.  Jacobs was at the Vatican representing the NGO, Religions for Peace of which he is a co-president.  Religions for Peace, a subsidiary of the United Nations, was holding a conference at the Vatican titled, Ethics in Action 3: Migrants and Refugees. The Pontifical Academies of Sciences and Social Sciences, the University of Notre Dame, and the United Nations Sustainable Development Solutions Network were also co-hosts of the event.  Rabbi Rick Jacobs shared these words about his meeting with Francis,


“Pope Francis is one of humanity’s most compelling moral voices. I found him personally warm and thoroughly inspiring. I was honored to say to him that his leadership isn’t only for the Church but also for all humanity.

We discussed refugees and migrants, the focus of the powerful conference taking place through today at the Pontifical Academy of Sciences. We shared our respective concerns about the US Administration’s approach to immigration in particular. I told him that I hoped that his meeting with President Trump would have an impact on that and other issues. I informed him about the Reform Jewish Movement’s work opposing the Administration’s current efforts to close the gates to refugees, including our endorsing yesterday's circuit court decision against the discriminatory ban, and that we will join with others to continue to oppose the presidential ban all the way to the Supreme Court.

I was deeply honored to have had the opportunity to tell Pope Francis how appreciative we are of his work on interfaith relations and cooperative endeavors for the common good. His words, actions and teachings on the poor, the refugee, the marginalized, on protecting our environment and God’s creations are an inspiration to ignite a world in deep need of leadership on these issues and compassion toward all. We also applaud his efforts to secure Middle East Peace based on a two-state solution that embraces Israel’s security and well-being as well as the fundamental rights of the Palestinian people.

I said that there were painful chapters in the history of the Church and the Jewish people but that today’s chapter has moved from fear to love.

At the end he asked that we pray together. We stood, we held hands—he blessed me in Italian then I blessed him in Hebrew, with the ancient words of the Priestly Benediction. It will remain one of the most profoundly spiritual and memorable moments of my life.” 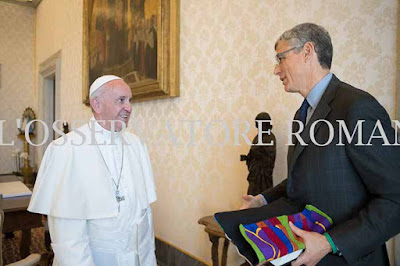 Posted by hereisjorgebergoglio at 3:50 AM