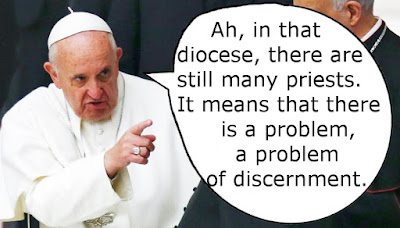 Below is a translation of a recent post from the blog, Benoit-et-Moi 2017, which reveals Francis as a sour puss, who hates anything that resembles piety towards Christ even remotely in a modernist form.  One can imagine the glee he would have shown had this been a group of new graduates from a rabbinical school instead of conservative members of the Novus Ordo.

This story dates back to a few days ago. It is not an isolated fact, but an episode that shares similarity with many others, and which reveals a rather disturbing facet of the personality of the pope, at least one far removed from the cordial Francis shown by the media. This same priest confides to me: “An Argentine friend, who knew bishop Bergoglio well, tells me that he can be very hard with the weak.”

The reliability of the source (of which I do not wish to reveal the identity, but who is a known personality) is above all suspicion.

A group of young priests from the same diocese, who have just been ordained, made a pilgrimage together to Rome. They are not traditionalists, but young priests of today, white shirt with small collar, classical, pious, normal, very happy with the gift of Christ they have just received. They naturally asked and got to lunch at Santa Marta and to be introduced to the Pope, and also to concelebrate with him the Mass of the next day.

They arrive at Santa Marta, at the appointed time, and put themselves in the place that is indicated to them. A secretary tells the Pope who is coming to them. The Pope: “Where are you from?” They, all proudly: “Of the diocese of X”. He, with the look of bad days: “Ah, in X, there are still many priests. This means that there is a problem, a problem of discernment.” And the Pope continues to walk on.

The young priests, aghast, look at each other, consult, and skipped eating. And the next day they dispensed with the concelebration at Santa Marta.

Posted by hereisjorgebergoglio at 3:54 PM