Par for the course when you have “three Martinis a day” 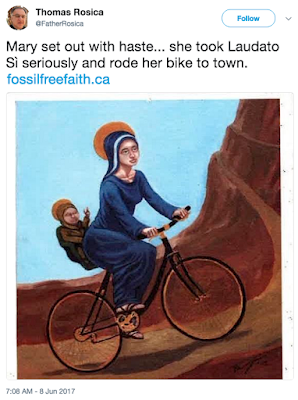 
Thomas ‘three Martinis a day’ Rosica just cannot help himself.  When he is not busy blocking half the world from his twitter account, he fills his time by denigrating the Holy Family.  In the past he said that the Holy Family was irregular and this time he’s still showing little respect for the Blessed Virgin Mary and the Child Jesus as he depicts them riding a bicycle to save the environment.  Didn’t Jesus the Christ save the world already?  The lamebrained imbecile is probably very excited that the 500th anniversary of Martin Luther’s 95 theses will be coming up shortly.  He’ll most likely blow another gasket when he sits down and reads what the blogosphere has been saying about him recently but this Noahide closet Mormon will smugly think to himself, ‘I work for Francis the new evangelization, Who do those anonymous rigid haters think they are?’  And to think this man has his own television station (Pepper + Darkness) in addition to being the English language media attaché for the Holy See Press Office.
Posted by hereisjorgebergoglio at 8:47 PM