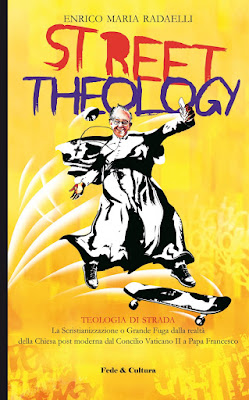 STREET THEOLOGY: The de-Christianization or Great Escape from the reality of the post-modern Church from Vatican II to Pope Francis.  The cover portrays Francis as taking a selfie while riding a skateboard — this is accurate as Francis is a revolutionary who teaches not the Catholic Faith but the contrivances of the rabbis.


This is a book published in 2016 by one of the students of the late Romano Amerio (a critic of the Second Vatican Council), Professor Enrico Maria Radaelli.  His thesis is that ‘street theology’ like ‘street art’ — sneaking inside great art and museums these days — is working it’s way into the post-modern church under the guise of saving the church and you.  This guise is the opposite of what is taking place which is nothing less than the destruction of Catholic institutions and morals.
Radaelli rightfully denounces theses destroyers of Christianity and ‘street theologians’ citing Psalm 73:


“They have annihilated a people, millions are exterminated, and in the meantime they talk of ecological problems and of mercy by putting [church] doctrine underneath the carpet with the dust. ... Just as the Psalm prophesied: They thought, ‘To destroy us all’; They have burned all the shrines of God in the land.”


The world is now one of fantasy and hyper-confusion where the eternal truths proclaimed by the Church are no longer proclaimed and in fact are ridiculed.  There is a reason for the vagueness of documents flowing from the Vatican which can be read a myriad of confusing ways depending on the perspective of the reader.  This Talmudic politically correct Novus Ordo which seeks to escape from reality leads one directly into the schizophrenia of noahidism.  Pray for those pewsitters in the Novus Ordo who are being inculcated with this ‘street theology’ that they may wake from the nightmare.