the new evangelization in North Carolina 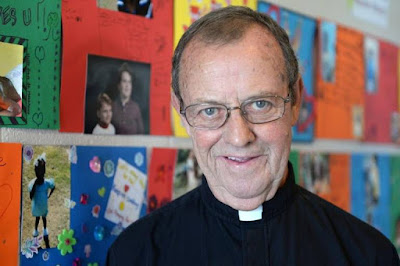 Pro-homosexual and acolyte of Vatican II, Msgr. John McSweeney, ran the largest parish
in the United States with 10,000-plus families until he retired on 16 July 2017 .

During an interview with the Observer, he spoke candidly about a Catholic Church he thinks has often put the Book of Law before the Book of Love.
Echoing Pope Francis – the fifth pontiff to reign during McSweeney’s time as a priest – he’d like the church and the diocese to be more about hospitality and less about judgment. That means, he said, being more welcoming: Of divorced-and-remarried Catholics, of LGBTQ persons, and of others who have long felt excluded by the church.

With too few diocesan priests, including in Charlotte, where the Catholic population is booming, McSweeney said he’d also support the church re-opening the door to married priests by making celibacy optional – as it was the first 1,000 years of Roman Catholicism.

“And many men I was in the (Catholic) seminary with would be great priests today except for one thing,” he added, that one thing being their desire to get married.

McSweeney said he’s also “very concerned” that many of the priests graduating from seminaries these days are too conservative and could spur a revolt by Catholics in the pews against the priests’ efforts to stifle the reforms of the Second Vatican Council. Also known as Vatican II, this council in the 1960s embraced church reform, including expanding the role for lay Catholics and celebrating the Mass in the local language more so than in Latin.

“The population that is the worshiping Catholic community have no understanding or history of pre-Vatican II,” he said. “They weren’t born (yet). The same with these young priests.”

McSweeney said Vatican II called for active lay participation in the liturgy, or Mass. “What I see happening (at some parishes) is that is not happening,” he said. “It’s being stopped.”

Lay people, particularly women, are not being permitted, for example, to dispense Communion as Eucharistic ministers. Altar boys are allowed, but not altar girls.

These young priests, McSweeney said, “are trying to reform the reform. ... I don’t endorse what they’re doing to God’s people.”

Recently, at a Catholic church in Waynesville, which is part of the Charlotte diocese, the pastor resigned after many from the congregation left to protest his insistence, for example, of replacing popular hymns with the ancient Gregorian chant.

McSweeney, who participates in celebrating an annual Mass for gay and lesbian Catholics in the the diocese, said his issue with Mecklenburg Ministries was “you don’t tell me who to invite.”

McSweeney also said he “won’t go there” in taking a stand on whether women should be ordained priests in the Catholic Church. Recent popes, including Francis, have said it will never happen, even though several large mainline Protestant denominations have been ordaining women clergy for years.

But McSweeney does favor letting women become deacons, which would give them the authority to preach at Mass, baptize and perform weddings.
And the monsignor said about 95 percent of his 63 staffers at St. Matthew are women, including the church’s chief financial officer, its chief of facilities and most of its clinical counselors.


Are they there to worship God or Msgr. McSweeney?


Honored by his local Congressman Robert Pittenger in his 1 minute address to  the U.S. House of Representatives


What’s the difference between
this mess and protestantism?
Posted by hereisjorgebergoglio at 12:08 PM