Who does papal biographer George Weigel work for?


“The cross beneath which I wrote Witness to Hope and The End and the Beginning is a framed reproduction of Marc Chagall’s White Crucifixion.” 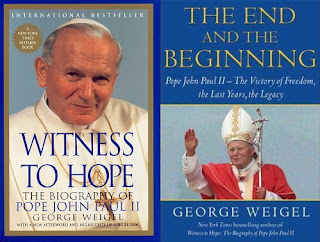 Here we have Chagall’s blasphemous portrayal of Jesus as a Hasidic ‘Christ denying’ Jew turning up once again.  Not only is this Francis’ favorite painting but George Weigel’s as well.   Why would a ‘Catholic’ write two biographies of John Paul II under a painting with the inscription, above a crucified Jesus, which is a Hebrew rabbinic acronym for, “May his name and his memory be wiped out”?

Who is Weigel revealing this fact for?  Looking at George Weigel’s behavior elsewhere: we see that he endorses the Kabbalistic Gnosis of Rabbi Abraham ‘I Want to Attack Christians’ Souls’ Heschel; has written, “Christian supersessionism — the notion that ‘the people of God of Israel has ceased to exist’ — is heresy and must be firmly rejected.”; has connections to IDF Intelligence and MEMRI (known for its fraudulent translations and cherry picking of Arabic clips) via Yigal Carmon; supports the Jonathan Institute’s creation the ‘War on Terror’; and associates with a slew of neo-cons among them Menahem Milson.

It’s obvious that Weigel isn’t a Catholic nor does he serve Jesus the Christ.  In his autobiography his occultic nod, like Francis, to Chagall’s blasphemous painting is a form of ritual mockery showing whom he serves.  This taken together with the other evidence shows that George serves Orthodox Judaic supremacists.