Francis adds another Talmudic Jewish book to his library 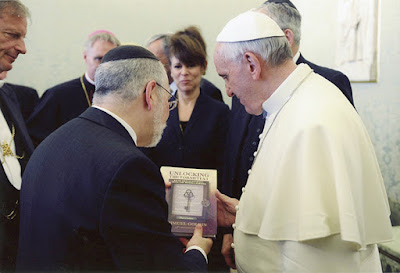 
Rabbi Shmuel Goldin is currently the head of the Ahavath Torah shul which is “one of the largest and most influential Orthodox shuls in the country.”  He is helping to transition in the new rabbi, afterwards Goldin and his wife will be moving to Israel.  An article, Another trip on Goldin Way, in the Jewish Standard had this to say, “Rabbi Goldin is a teacher as well as a preacher and pastor; he’s also taken on highly visible national and international roles, as a past president of the Rabbinical Council of America, which represents modern and centrist Orthodox rabbis, and as an active and influential member of RCA committees.”  Rabbi Shmuel Goldin traveled to the Vatican with a group of rabbis for a private audience with Francis. While there he presented Francis with at least one of his books, Unlocking the Torah Text Bereishit, from the five-volume set — Unlocking the Torah Text, if not the complete set. 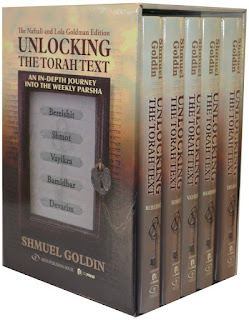 In the book shown being given to Francis in the photo, Rabbi Shmuel Goldin presents Jacob’s Ladder from Genesis through the mirror of a synagogue located in a concentration camp in the Theresienstadt ghetto.  There’s no business like shoah business!  Just what Francis needed another book explaining the first five books of the Old Testament through the distortions and falsifications of the Orthodox rabbis leading to the nullification of God’s word — it’s right up his alley! 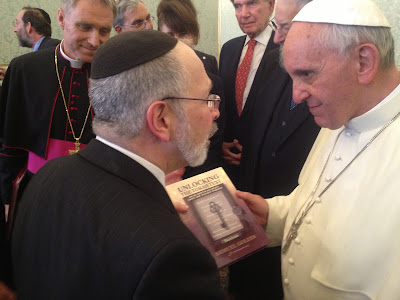 Ever wonder where Francis comes up with his anti-Christian
interpretation of the Bible — wonder no more,  from the rabbis.
Posted by hereisjorgebergoglio at 2:59 AM