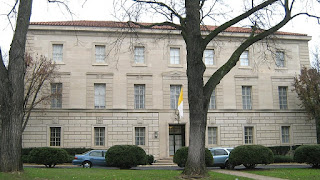 A high-ranking priest working in the Vatican's embassy in Washington has been recalled after U.S. prosecutors asked for him to be charged there and face trial in a child pornography investigation, Vatican and U.S. officials said Friday.

The diplomat was suspected of possessing, but not producing or disseminating, child pornography including images of pre-pubescent children, a U.S. source familiar with the case said. The source was not authorized to discuss the matter publicly and spoke on condition of anonymity.

The Vatican declined to identify the priest, but said he was currently in Vatican City and that Vatican prosecutors had launched their own probe and sought evidence from the U.S.

If the accusations pan out, the case would be a major embarrassment for the Vatican and Pope Francis, who has pledged "zero tolerance" for sexual abuse. The diplomat would be the second from the Vatican's diplomatic corps to face possible criminal charges for such crimes during Francis' papacy. And any trial in the Vatican would come as Francis' own financial czar, Cardinal George Pell, is on trial in his native Australia for alleged historic sex abuse cases.

The State Department said it had asked the Vatican to lift the official's diplomatic immunity on Aug. 21. It said that request was denied three days later. For the State Department to make such a request, its lawyers would have needed to be convinced that there was reasonable cause for criminal prosecution.

Posted by hereisjorgebergoglio at 12:39 PM