Is Benedict XVI still in touch with John Paul II? 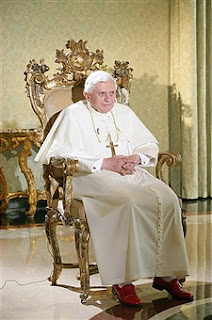 Benedict XVI being interviewed in the Papal Palace of Castel Gandolfo.


Benedict XVI was interviewed by Polish television on 16 October 2005.  It was his first television interview after his election.  During the interview the reporter asked Benedict XVI about his first homily which he gave to the College of Cardinals in the Sistine Chapel on 20 April 2005, specifically when he said, (underlines are ours for emphasis),


“Dear friends, this deep gratitude for a gift of divine mercy is uppermost in my heart in spite of all. And I consider it a special grace which my Venerable Predecessor, John Paul II, has obtained for me. I seem to feel his strong hand clasping mine; I seem to see his smiling eyes and hear his words, at this moment addressed specifically to me, "Do not be afraid!".”


“The Pope [John Paul II] was always very close to me through his writings [texts]: I see him and hear him speak, and I can be in a continuous dialogue with the Holy Father because he always speaks to me through these words; I also know the origin of many writings, I remember the conversations we had about one text or another. I can continue the dialogue with the Holy Father. Of course this proximity through the words is not just a proximity purely with the writings but also with the person; behind the writings I feel the Pope himself. A man who goes to the Lord does not leave; more and more I feel that, being with the Lord, he [John Paul II] is close to me also. Insofar as I am close to the Lord, I am close to the Pope and he helps me now to be close to the Lord. I try to enter into his ambience [atmosphere] of prayer, into his love for the Father, his love for the Mother of God, and I entrust myself to his prayers [intercession]. It is thus a continuous dialogue and a being-close-to-one-another — although in a new, yet also very profound, way.” (English translation is CMJ’s)


After reading this a few questions spring to mind: 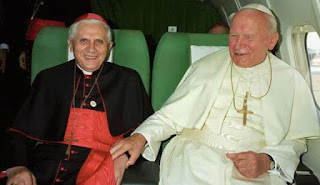 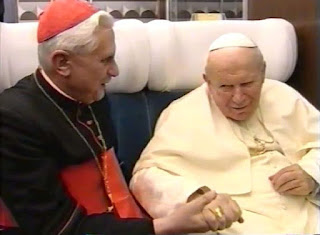 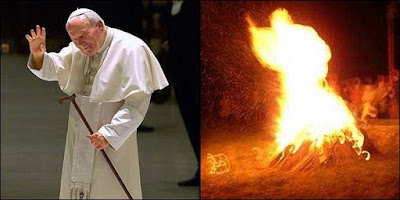 Maybe they will touch hands again, one day soon...
Posted by hereisjorgebergoglio at 2:07 PM