the ongoing process of turning the Novus Ordo church into Noachides 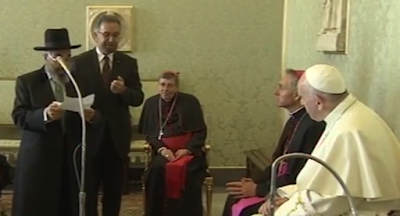 Rabbi David Shlomo Rosen translating for Rav Dr. Ratzon Arusi in address to Francis during the presentation of ‘Between Jerusalem and Rome: The Shared Universal and the Respected Particular Reflections on 50 Years of Nostra Aetate’.


We at Call Me Jorge... are certain that this sentence went over well with Francis for his daily actions are in agreement with it.  Francis for those who are not aware is a huge fan of Moses Maimonides (Rambam) and in 2004 stated that he admires Maimonides’ open attitude towards other faiths.  What is the Rambam’s open attitude towards other faiths?  Yossi Gurvitz, an Israeli Jew, sums up nicely the Rambams’ beliefs in a video, “Daekei Shalom” (peaceful ways) apply until “Israel is Mighty” resulting in “no mercy!”  Michael Hoffman also writes, “Moses Maimonides was the foremost interpreter of the Jewish Talmud and one of the most implacable enemies of Christ in the annals of Judaism. Maimonides is on record, in his commentary on the Mishnah, calling for the execution of all Christians and hoping that the name of Jesus, the “name of the wicked, shall rot.””  A sample of Maimonides’ open attitude can be gleaned from his extensive writings:

“It is a mitzvah (religious duty highly pleasing to God), to destroy Jewish traitors, minim, and apikorsim, and to cause them to descend to the pit of destruction, since they cause difficulty to the Jews and sway the people away from God, as did Jesus of Nazareth and his students, and Tzadok, Baithos, and their students. May the name of the wicked rot.” (Maimonides, Avodat Kochavim)

“The Christians are idol worshippers and Sunday is their festival.” (Maimonides, Mishneh Torah: Hilchot Avodat Kochavim 9:4)

“Jesus of Nazareth who imagined that he was the Messiah and was executed by the court, was also alluded to in Daniel's prophecies, 'the lawless among your people shall exalt themselves in an attempt to fulfill the vision, but they shall fail. Can there be a greater stumbling block than Christianity?” (Maimonides, Mishneh Torah: Hilchot Melachim 11:4)

“Know that this Christian nation, who are making the claim of a messiah, with all their many different sects, are all idol worshipers and all their holidays are forbidden, and we deal with them regarding religious issues as we would pagans.” (Maimonides, Mishneh, tractate Avoda Zara 1:3)

“Therefore one must know that in every one of the Christian nation’s cities which has an altar, meaning their house of worship, it is a pagan house of idolatry without any doubt.” (Maimonides, Mishneh, tractate Avoda Zara 4)

“The Christians are idol worshipers and Sunday is their religious holiday, therefore in Eretz Israel we may not trade with them on Thursday and Friday of every week, and needless to say on Sunday, which is forbidden [for trade with Christians] everywhere.” Trade in this context refers especially to paying back loans, which would enhance their joy on the day of their idol. (Maimonides, Hayad Hachazaka, Hilchot Avoda Zara 9:4)

“These Muslims [Ishmaelim] are not in any way idolators. [Idolatry] has already been removed from their mouths and their hearts, and they unify G-d in the appropriate manner without any admixture [of idolatrous beliefs].” (Maimonides, Responsa, 448)

“.. a gentile who worships false gods is liable, [for the death penalty] provided he worships them in the accepted manner. A gentile is executed for every type of foreign worship which a Jewish court would consider worthy of capital punishment.” (Maimonides, Mishneh Torah, Hilchot Melachim 11)


And if the above isn’t enough Maimonides, for the dear reader, we suggest reading this excerpt where Maimonides and his noahide law “dictates that an entire city should be wiped out because of the wrongdoing of only one of its inhabitants.”  How’s that for mercy!?

Keep in mind these are the words and beliefs of a rabbi whom Francis highly esteems for his open attitude towards other faiths!  Don’t be mistaken to think this admiration of Maimonides started recently with Francis, for John Paul II was also an admirer of the Rambam.  In a future post, God willing, we will revisit Maimonides and his vision for the Catholic Church as explained by Francis’ roving ambassador, Rabbi Abraham Skorka.

Edited video of the private audience and presentation.


Some of the words of wisdom from Rav Dr. Ratzon Arusi (the rabbi of the city of Kiryat Ono and a member of Israel chief rabbinate council, founder and chairman of the Halichot Am Israel Organization — a movement bringing people closer to Judaism through Talmud study — and delegation member of Between Jerusalem and Rome: The Shared Universal and the Respected Particular Reflections on 50 Years of Nostra Aetate) gave in an interview with Srugim about the 31 August 2017 meeting with Francis:

“It is clear to all that the Catholic Church was one of the strongest forces that poisoned the people of Israel with the venom of hatred.  It was an anti-Semitism that came out of it all the years because the Christians accused us of crucifixion of Jesus, and as a result they determined that we were a traitor and inferior, and hence all hatred was fostered both within the Catholic Church and outside it.”

“The great rabbis of Israel have always found it necessary to meet with popes. The late Rabbi Herzog met with the pope at the time, even though he was not a fan of Israel, and did all in order to try to reduce the hatred. The present pope Francis made a very important statement condemning antisemitism, not only concerning the Jewish people but extended it to all Israelis of the State of Israel, because today our enemies are fighting against us with international terrorism in order to delegitimize us as occupiers and racists. The world is developing anti-Semitism as a result of the Israeli-Palestinian conflict, and the pope's statement on the subject is a huge achievement.”

“The Sages saw Rome and Jerusalem as two diametrically opposing systems, and therefore we revealed within the same historical document the uniqueness and destiny of our people as the people of God, and we mentioned the role of that the Catholic Church had in the past of the hatred that pervades us - and the transformation that began in the 1960s, since the announcement [of Nostra Aetate].”

“We went to deliver this document to the Pope, and at the same time I said that we did not come to obscure the differences between us [Talmudic Judaism] and Christianity, but rather to encourage and nurture the understanding that is becoming more and more crystallized in the Catholic Church regarding the uniqueness of our nation and its chosen people as God’s people. Zephaniah the prophet said, ‘then I will turn to nations ... a clear language ... to call them all in the name of the Lord, to serve one.’ ”

Rabbi Arusi adds that Christianity is far from following the path of [Talmudic] Judaism, because as Maimonides wrote that they are considered idolaters, they have uprooted a large portion of humanity with profane [crude] idolatry. “I told the Pope: If we all believe in one God and worship Him, this is the basis for true peace.”


Any questions on the direction Francis is steering the S.S. Novus Ordo? 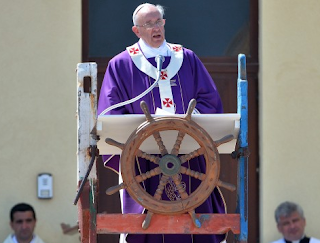 Posted by hereisjorgebergoglio at 10:34 AM