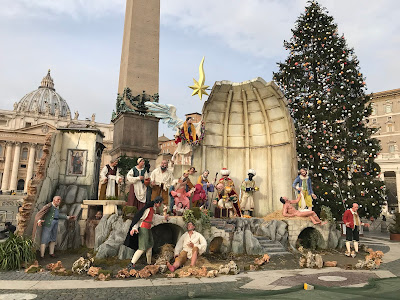 Uh oh, the Star of Bethlehem is crashing to earth!


We have to hand it to Francis, this year for the Vatican’s Nativity Scene he didn’t put a boat in it as he did last year.  Below are a few photos and one video of the creche.  From a distance it looks like a traditional presepe until one gets closer and can examine the details. 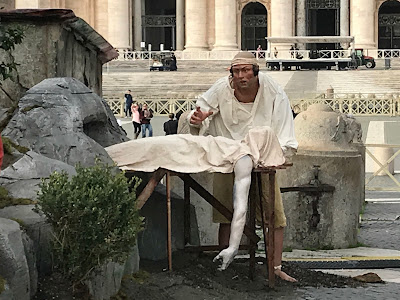 Nothing like a dead body in a Nativity Scene. 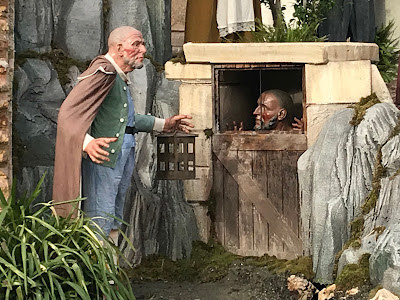 This is where Francis belongs in jail. 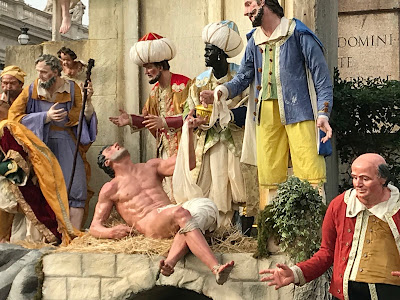 Not only does a naked muscle bound man make an appearance at the
creche, he totally ignores where the Infant Christ will be placed.

"But this is not the thing that most concerns us," the second person said. "We are concerned about the decorations on the Christmas tree from Poland. We have not seen a single religious symbol, not a single Christian symbol, on the tree."

So we walked around the tree.

And I too saw that there seemed not to be a single Christian symbol on the tree, unless the star on the top of the tree could be considered a sign of the star that led the Magi to the Christ-child.

"Look," said my friend. "There are peace signs, and the oriental yin-yang signs, but no angels, no depictions of the Magi, no images of Mary, nothing but universal symbols. Many nuns in Rome say they are shocked and are very worried about the message these decorations are sending to the youngest. I wish I knew the Pope's secretaries to tell them to tell the Pope what is on the Square, if really the Holy Father wants to go and to bless such things. The worst thing for all these sponsors would be for the   Pope not to come to the Square on December 31."

Here is a poor Iphone photo showing one of the yin-yang images on the tree: 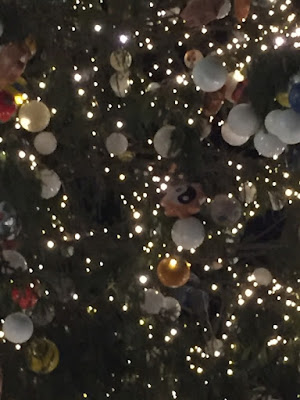 "What has happened to us?" my other friend said. "What is our message? Where is Christ? There are no longer Christian signs on the Christmas tree! Really, we find Nativity scene this year just scandalous. What we are teaching our children? I feel sorry that people may think the Pope agrees with this."

In past years, they said, the Christmas tree was decorated with brilliant white and yellow balls, the Vatican colors.

The two said they had written a letter to the Government of Vatican City, protesting the decorations on the Christmas tree.


Ostensibly the reason given for this mockery is that the Nativity Scene’s theme this year is the seven corporal works of mercy.  Francis can’t help himself can he?  The focus isn’t on Our Lord’s birth but on the grotesque and macabre sideshows.  What can one say about this scattered and disoriented Nativity other than it is sacrilegious and shows the spiritual emptiness of Francis and his cohorts. To call this art in honor of and worthy of the birth of Our Savior, Jesus the Christ, is pure mockery.

The unveiling of the grotesque immodest macabre Crib!