Francis candidly jokes that ‘witch doctor’ is behind his stamina

Francis on his way to Chile.


On the papal airplane from Rome to Chile, Francis offered his latest off the cuff quip.


“Loud laughter accompanied the joke Francis made in response to the query asked by Cristiana Caricato, a journalist of TV2000, who, (upon) greeting him, had asked him: “We want to know what the doctor gives you so that we can take it too, we who struggle just as you do” — a reference to Bergoglio’s stamina during these trips. “But I do not go to the doctor, I go to the witch!”, he said, laughing with gusto.”


As is usual with Francis’ jokes there is always a grain of truth to his answers.  In the past Francis has:

All of these ‘jokes’ reveal facets of Francis’ inner-Jew.  Francis publicly maintains that, “One cannot provoke, one cannot insult other people’s faith, one cannot make fun of faith.”  Notice what he never jokes about Talmudic Judaism, the Holocaust, or noahidism — a synthesis of all heresies.  All these are strictly off limits while the Catholic faith is open to mocking jests.  We are digressing, returning to Francis reply, Francis does see witch doctors — typically they come to visit him.  Below are two of the witch doctors whom have visited Francis in the Vatican. 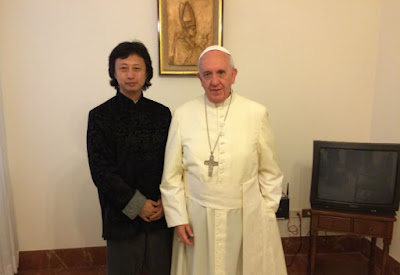 Liu Ming is a Taoist monk (aka witch) who has been Jorge Bergoglio’s
doctor since 2004.  He disturbingly practices Reiki energy on Francis. 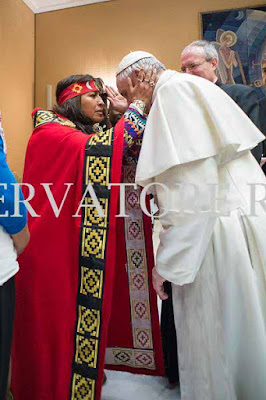 A shaman (aka witch) performs an incantation on
Francis (15 February 2017) in the Vatican.


So one can see the truth in Francis’ latest joke.  The question arises whom is Francis mocking when he jokingly but truthfully replies that ‘visits from witch-doctors give him stamina’?  Simply, the answer is the typical pewsitter that thinks Francis is a practicing Catholic.  Francis has nothing but contempt for these people as his mocking jests and  candid jokes reveal.

Posted by hereisjorgebergoglio at 12:48 PM