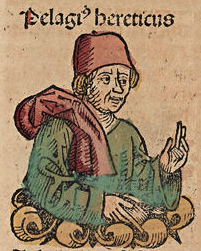 Andrea Gagliarducci writes in his article, Pope Francis, how are his reforms proceeding?,


“In the offing, it also seems the Pope is going to write a new document, perhaps an encyclical, on spirituality in the modern world, with a strong accent against neo-pelagianism.”

Francis use of the terms neopelagianism and neopelagians are an inversion of the original meaning of the words.  This is in the same manner as those of the homosexual perversion who have taken the word gay — a person who is happy, merry, full of cheer — and inverted its meaning — one who practices the mortally sinful perversion of homosexuality. What Francis means when he uses neopelagian is one who adheres to traditional Catholic dogmas, doctrines and customs before the Second Vatican Council.  Here’s the definition of Pelagianism as understood by everyone but Francis and his cronies: 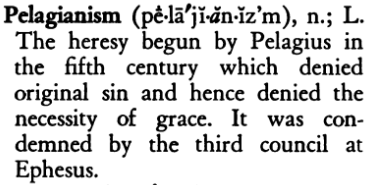 
In fact, Francis is guilty of the crimes that he accuses neopelagians being guilty of!  Francis’ beliefs are similar to Pelagianism but with a diabolical twist. 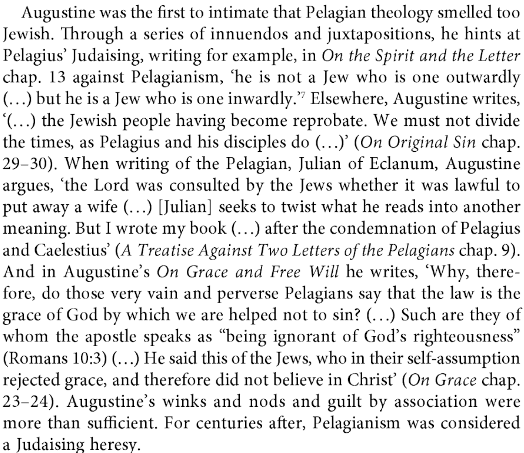 source: Will and Grace: Aspects of Judaising in Pelagianism in Light of Rabbinic and Patristic Exegesis of Genesis by Burton L Visotzky published in The Exegetical Encounter Between Jews and Christians in Late Antiquity, p. 45


Francis’ twist which makes him a neopelagian and not simply a Pelagian is that Francis does believe in Grace.  Francis perverse belief is that Grace comes from sin!  This belief is straight out of Hasidism and one of its central tenets.  This Hasidic process of sinning on order to come closer to God is explained in the post, Where Francis' doctrine originates, and recently Francis catchecized his fellow Jesuit on how Sin leads one to Grace when he was in Peru, La Civiltà Cattolica, “Where have our people been creative?”.

We were being facetious with the title of this blog post when stating that Catholic were waiting with bated breath over this rumored encyclical.  Will Catholics ever awaken from their deep slumber if and when this rumored encyclical is released or will they continue to blissfully continue to sleep in the pews as Francis and his cronies process them into faithful noahides?

These woman are not neopelagians.  You can tell as they are not
wearing veils but those sleeping men, they are wearing suits...
Posted by hereisjorgebergoglio at 2:43 PM