What’s going on at the FSSPX? 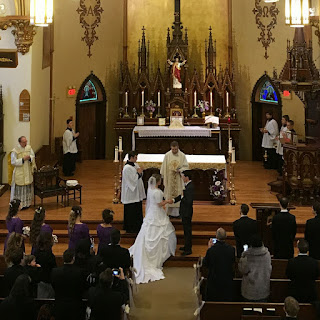 A Novus Ordo diocesan priest oversees the exchange of vows
while the SSPX priest stands to the side and watches.


“Thus, we find ourselves in a case of necessity.... This is why we are convinced that, by the act of these consecrations today, we are obeying... the call of God.” — Abp. Marcel Lefebvre in sermon given at  the episcopal consecrations of June 30, 1988.

Last month on February 10, 2018, a couple from the FSSPX community of St. Raphael’s in Winnipeg, Manitoba, Canada were wed by a Novus Ordo priest, Fr. Kelly Wilson.  This wedding didn’t take place at St. Raphael’s, instead it happened in Fr. Wilson’s diocesan church of St. Augustine of Canterbury in Brandon, Manitoba, Canada.  After the exchange of vows, Fr. Richard Vachon, who had witnessed all this go down, proceeded to offer a nuptial mass (Tridentine Mass — 1962) in the Novus Ordo St. Augustine’s.  According to the Remnant Newspaper,


“The couple preferred the church of St. Augustine for the ceremony, and Fr. Vachon reportedly indicated to them that since it is the couple who are the ministers of the sacrament of marriage, it doesn’t matter which priest officiated.”


This leads to all sorts of questions.  First off, is Fr. Kelly Wilson a valid priest?  If so, is the Novus Ordo Missae valid?  If so, since communion is given in the hand and particles of the host fall on the ground, did not — the bride, groom, bridesmaids, groomsmen, priests, and guests — all those present walk on Christ?

What if the bride and groom tire of each other and decide to get an annulment?  Will they go to the diocese where annulments are given out for fogging a mirror?  Or will they go to the SSPX which claims a right they do not have under a “state of necessity” to grant annulments? 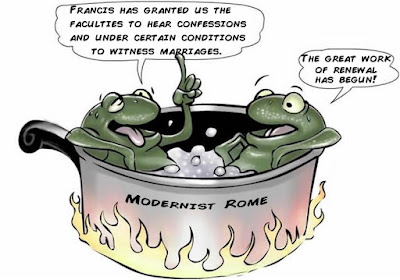 The answer to all these questions is dependent on whom in the SSPX you ask them to and how well the talks with Modernist Rome are going at the moment.  Sometimes they say, ‘yes, it’s doubtful’ other times, ‘no, it’s valid’.  None of this should be surprising as the FSSPX runs hot and cold.  Perhaps, Bp. Bernard Fellay can clarify as to what SSPX’s policy is regarding marriage and their agreement with Modernist Rome?


(From 1 minute 12 seconds to 16 minutes 40 seconds; Bp. Fellay speaks on marriage and the Vatican granting them the privilege to perform weddings provided they meet certain conditions; Letter can be read by clicking here.)
St. Raphael’s Priory of the SSPX in Winnipeg, Manitoba, Canada was so proud of the Novus Ordoized - Extraordinary Form wedding that they published a photo of the married couple standing beside the Novus Ordo presider and SSPX priest (see below) in their bulletin of March 2018.

Is the Society bringing the Faith back to Modernist Rome and its Novus Ordo Missae or is the Society becoming that which it so strongly protested for years?

It’s interesting times to be living in. Hey if the Vatican can have two popes, why not have two priests for a wedding?

The above mentioned groom writes an open letter concerning his wedding and the SSPX—Canada posts it on their official website.

A clarification on my wedding

I, Nicolas Lessard, got married to Monica Green on the 10th of February 2018, in the Roman Catholic Church of Saint Augustine of Canterbury in Brandon, Manitoba. Both my wife and I are faithful of the Society of Saint Pius X. The host priest, Father Kelly received our vows, and Father Vachon, of the SSPX celebrated our wedding mass. Following the wedding, there has been a lot of buzz about the circumstances of the wedding in the context of the relationship between Rome and the Society. This letter intends to address this “controversy”.

The first point I would like to make is that the controversy started off with the SSPX's Winnipeg bulletin showing a picture of my wife and me, Father Vachon of the SSPX, who prepared our marriage, and Father Kelly. The bulletin didn’t give many details and the articles that spawned from it implied or assumed many things that were false. Normally, someone who doesn’t know all the aspects of an issue should give the benefit of the doubt, in all Christian charity. The fact that some bloggers did not do so indicates to me that they are spinning a story to drive an ideological narrative, which is disingenuous and dishonest.

The second point addresses the location of the marriage. The location was not imposed on us by the diocese or the SSPX but was freely chosen by Monica (from SK) and myself (from QC). The SSPX priests here do not have the necessary civil license to perform marriages in Saskatchewan (SK) since they do not reside there, which complicated the location selection. We found this church, which presented all the qualities we were looking for which many churches, including both the SSPX churches in Welwyn (SK) and Winnipeg (MB), lacked. These include seating capacity, whether the church was heated (we’re in Canada here!), distance to the reception hall, cost, transports, and the dignity of the church. This last point is worth mentioning since all attendees noticed the sheer beauty of St. Augustine of Canterbury. There was an appreciation for the beautiful harmony of the Traditional liturgy, the Gregorian singing and the church’s well preserved gothic interior.

The third point regards the laws of the Church. Monica and I consider ourselves not just faithful of the SSPX, but faithful Roman Catholics. In spite of the cancerous crisis going on in the Church, she stays the One True Church of God, and thus the errors of her representatives do not negate the obligation to follow legitimate requests. Neither of us were willing to weaken our marriage bonds by operating outside proper regulations.

We would have had Father Vachon receive our marriage vows if it had been up to us. But since, we were in a church of the diocese, we followed the directives given to the Society by Rome concerning the Society’s marriages. We understand that the Society has followed this same procedure for many individual cases long before these directives were published anyway; actual SSPX parishioners will know that.

I hope this letter answers most of the questions that were raised from this one picture and label in a parish bulletin. Although it is unfortunate that our marriage was used by some online to promote baseless speculation, my wife and I will take this occasion to ask those who read this to pray for us and for the SSPX!

Posted by hereisjorgebergoglio at 8:59 PM