The Holocaust is the keystone of Francis’ mental framework

...without which, it all falls apart. 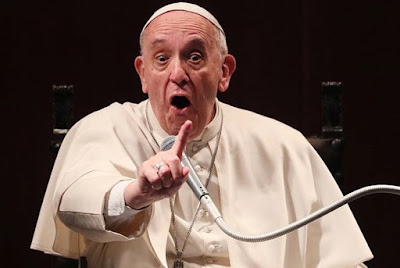 We have exhaustively covered how Francis “Who am I to judge?” in fact doesn’t judge anything or anyone unless it goes against his religion of Holocaustianity.  How central the Holocaust is to Francis and his religious framework has been apparent this past week. On Saturday, 16th of June, Francis finished off his address to the Delegation of the Forum of Family Associations with this,

“When I was a boy, the teacher taught us history and told us what the Spartans were doing when a child was born with malformations: they took him to the mountain and threw him down, to keep "the purity of the race". And we were shocked: "But how, how can this be done, [those] poor children!" It was an atrocity. Today we do the same thing. Have you wondered why you do not see many dwarves on the street? Because the protocol of many doctors - many, not all - is to ask the question: "Is he/she bad?". I say this with pain. In the last
century the whole world was scandalized by what the Nazis did to treat the purity of the race. Today we do the same, but with white gloves.”

On Monday, the 18th of June, Francis followed this up with a homily on communication, lies, and evil stating,


“Have last century’s tragedies thought us nothing? Pope Francis cites a glaring example, the persecution of Jews. “A slanderous communication against the Jews; and they ended up in Auschwitz because they did not deserve to live. Oh... it’s a horror, but a horror that happens today: in small societies, in people and in many countries. The first step is to take charge of communication, and after: destruction, judgment, and death.... The Pope’s invitation is therefore to re-read the story of Nabot in the first Book of Kings and then to think and pray for the many victims - men, women, children, entire nations - devastated by “so many dictatorships with “white gloves””.”

Francis cannot differentiate between good and bad because everything is relative.  The only thing he knows with certainty is that the Holocaust was an absolute evil.   It is the standard which he uses as a basis for his judgment of what constitutes evil.  He uses this gold standard as the foundation of all his values and has thereby become an echo chamber of the Holocaust education machine.  When speaking of abortion or slander, it all has relevance only because of the Holocaust.

Francis sees the Holocaust as being the only memory worthy of being a frame of reference and in order for Christians to be forgiven for the Holocaust, Francis wants them to adopt the Noahide laws by hook or by crook.  As the fraud Elie Wiesel once wrote, “In the beginning was the Holocaust...”


#WeRemember the #Memory of the apples and will #NeverForget

#WeRemember the #Memory of the baloney, the soap, and the showers and will #NeverForget

Posted by hereisjorgebergoglio at 6:54 PM