The harsh reality is that Mandela was a communist, a terrorist, and a liar.  He was a member of the African National Congress (ANC),  an organization classified by the U.S. State Department as a terrorist group.  Mandela co-founded the armed militia of the ANC — Umkhonto we Sizwe (Spear of the Nation) — filled with the diehard terrorists of the terrorist group.  The ANC, for those who don’t know, pioneered necklacing — filling a tire with gasoline, putting around the victim’s neck, lighting it, and watching the person slowly die a most horrifying death — of their fellow blacks.  One can read Mandela’s handwritten manuscript online, ‘How to be a Good Communist’ (click here).  For those interested in a more detailed history of the man we recommend the article, “Saint” Mandela? Not So Fast! by William F. Jasper. Far from being ‘a man of peace’, Mandela condoned the murder of his fellow Africans whether they were black or white.

Nelson Mandela can be seen in this video (1:38-2:52) raising a communist fist while standing next to South African National Intelligence Minister Ronnie ‘I’m not White, I’m Jewish’ Kasrils 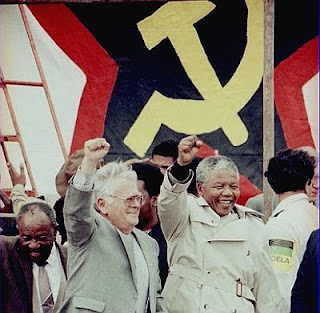 Commander of the ANC’s Umkhonto we Sizwe, Joe ‘I’m not White, I’m Jewish’ Slovo (aka Yossel Mashel Slovo), and Nelson Manda raising the communist fist while standing under the hammer and sickle.

That one of the official mouthpiece’s of the Vatican is calling for people to take action and change in the name of a communist terrorist, should send shivers down one’s spine. 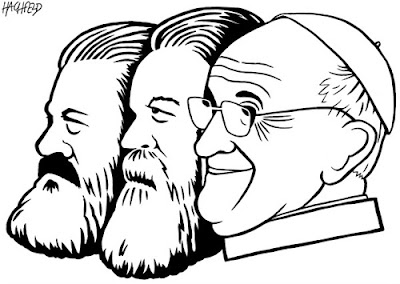 Posted by hereisjorgebergoglio at 11:16 AM