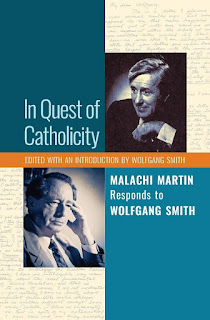 In Quest of Catholicity: Malachi Martin Responds to Wolfgang Smith

If I were younger, how I would love to follow in your footsteps to learn Hebrew, and delve into the Kabbalistic literature— without of course forgetting Jacob Boehme.  Actually, it seems to me that Kabbalah, Hermeticism, and the doctrine of our German mystic can hardly be separated.  These three legacies seem to form one underlying tradition, one grand perennial doctrine, which as you say springs from Christ Himself.  What Boehme has done is to expound that doctrine more openly, and in overtly Christian terms.  Perhaps, thanks to him, the Catholic Church will one day make Kabbalah its own!*  And I wonder whether perhaps it will be on the basis of this assimilated Kabbalah that the Church will eventually resolve the enigma of the “separated religions,” and in doing so will realize her own authentic and ultimate Catholicity.

Permit me to share with you a few quotations which you may enjoy.  The first comes from a book by Gershom Scholem [Zur Kabbala und ihrer Symbolik]  After pointing out that the Hebrew words ‘or (light) ras (mystery) have the same numerical value 207, he goes on to say:

“Thus the luster of the divine light that shines in the Toyrah is mirrored in the mysteries of this book.  But since these mysteries appear under the guise of the literal sense, their light is darkened.  The literal sense of the Toyrah is darkness, but the kabbalistic sense, the mystery, is the ‘Zohar,’ which shines through every line of the text.”

Is this not marvelous?  Here too, it seems, one can say: “The light shineth in the darkness...”

Next, let me give a quotation from the Zohar (Book I):

“The primal center is the innermost light, of a translucence, subtleness, and purity beyond comprehension.  That inner point extended becomes a ‘palace’ which serves as an enclosure if the center, and is also of a radiance translucent to an incomprehensible degree.  The ‘palace’ extends into a vestment for itself, the primal light.  From thence outward, there is an extension upon extension, each constituting a vestment to the one before, as a membrane to the brain.  Though membrane first, each extension becomes brain to the next extension.”

I am particularly struck by the phrase: “from thence outward.”  It seems to me to betoken the point of inversion: the point where “intensive” extension becomes extensive, that is to say, quantitative.

One more quotation, if I may (this to comes from Book I of the Zohar):

“Rabbi Isaac [Luria] said: At the Creation, God irradiated the world from end to end with the light, but then it was withdrawn, so as to deprive the sinners of the world of its enjoyment, and it is stored away fro the righteous, as it stands written: ‘Light is sown for the righteous’ (Ps. 97:11); then will the world be in harmony and all will be united into one; but until the future world is set up, this light is put away and hidden.   This light emerged from the darkness which was hewed out by the strokes of the Most Secret; and likewise, from the light which was hidden away, through some secret path, there was hewed out of the darkness of the lower world in which inheres the light.  This lower darkness is called ‘night’ in the verse, ‘and the darkness He called night’ (Gen. 1:5).”

Now, is this not in essence the “triple cosmology” of Jacob Boehme?


*Actually that recognition occurred long ago when Cardinal Egidio di Viterbo (1465-1532), a so-called Christian Kabbalist, referred to the Kabbalah as not “not foreign, but domestic.” See “The Wisdom of the Christian Kabbalah” in Christian Gnosis.

God, the Light, surely acted through [Jacob] Boehme, Rabbi Isaac [Luria], and [Shlomo Ben Yehuda] Ibn Gebirol and others.  You now have a great opportunity to explain the unity of the mystical knowledge of the divine as distinct from the rational.  I do believe John of the Cross with his doctrine of Light and Darkness belongs in this explication.

The Kabbalah connection is obvious.  Interestingly, the root-word in Semitic, QBL, has the same basic signification as the Greek which John the Evangelist uses in regard to man’s incapacity/non-reception/rejection of the LIGHT.  The Gematric value of ‘OR and RAS was important to the Rabbis.  But the best among them used Gematric values, not as normative of meaning, but as confirmative.

In a previous letter I mentioned certain caveats and precautions in expounding this magnificent theme to a Roman Catholic audience.   After the New Year’s beginning, let me drop you a few lines about this matter.

Here we have the supposed traditional Catholic Malachi Martin writing that God acted through:  the Lutheran-Kabbalist, Jakob Böhme;  Rabbi Isaac Luria, another Kabbalist who taught that the Messiah will come only after Israel corrects God’s mistakes throughout the world;  and Solomon ibn Gabirol (Avicebron), a Spanish poet and Kabbalist, who created a female golem!  Martin next has the nerve to lump Saint John of the Cross with these kabbalists when the reality is that Saint John of the Cross was a Judaic convert who left behind the Talmudic mentality when he embraced Jesus the Christ as his Savior.

Martin then goes on to extol rabbis for using Gematria in its normative and confirmative senses.  Gematria for those who do not know is a Kabbalistic method of interpreting the Hebrew scriptures by computing the numerical value of words, based on those of their constituent letters.  It’s insanity!

Finally, Malachi Martin advises Wolfgang Smith to use caution in expounding this “magnificent theme” to Roman Catholic audiences.  Telling him, he will offer some helpful tips on this matter after the New Year.

What else was this kabbalist up to around this time?

He was hanging out with occultic sedevacantists. 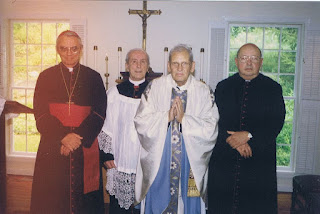