How cute, Francis gives Bono an olive bush. What a joke!


When asked about it on the airplane flight from Dublin to Rome, Francis laughably vowed to remain silent concerning the letter Cardinal Viganò wrote. On that same flight, he ordered his LGBT supporters in the press to destroy the reputation of and allegations made by Viganò.  Since returning to Rome, Francis has been anything but silent during his daily homilies where he has implied that Viganò is Satan, a great accuser, a gossip, a terrorist, etc... and stated that the real victims are the guilty bishops.

Cue the stage for Bono (Paul David Hewson), the tax avoiding front man of the world's highest earning band who loves nothing more than to publicly complain about the system which gave him his riches while he shills for the same system, to make an appearance at the Vatican.  Bono has a foundation, One, which is partnering with Scholas Occurrentes, Francis’ Vatican foundation for ‘education’.  The One foundation gets its name from the U2 song ‘One’ which was released as a benefit single for AIDS research and lyrically is about “disunity”.

After meeting with Francis and signing the agreement between One and Scholas Occurrentes, the Chabad connected foundation run by the Vatican which advocates a noahide educational program for students the world over, Bono held a press conference with José María del Corral — the president of Scholas Occurrentes.  During the press conference Bono said, “Having just come from Ireland, inevitably, we talked about his [being] aghast about what has happened in the Church. You could see the pain in his face. I explained to him how it looks to some people that the abusers are being more protected than the victims and you could see the pain in his face.” Bono continued, “I thought he was sincere.”  Bono’s spokesperson said that Bono believes Francis, “is the leader to put this right and change people’s perceptions that the church is doing more to protect the abusers rather than the victims.”  To which Bono added, “I think he is an extraordinary man for extraordinary times.”  Whew, for a second there, Call Me Jorge... , thought that Francis was going to ignore the problem like he did as a bishop and cardinal in Argentina or as he has during his reign in the Vatican, but no Bono assures us Francis will take care of the problem!  Paul David Hewson must be a good judge of character, it’s not like his One foundation is guilty of low morale, poor management, or sexual abuse.  Surely, he also has the good sense never to be “good friends” with a sexual abuser or dedicate a song to this same sex abuser, whom happens to be mentioned in Viganò’s letter.  Oh that’s right, Bono is guilty of the above in addition to being pro-global government, pro-contraception, pro-abortion, pro-sexual perversion, and pro-homosexual marriage.

Francis and Bono are two anti-Catholic globalist stooges, using stage names, attempting to usher in the global one world government as fast as they can while rubbing shoulders with and covering up for those guilty of sexual crimes.  If you haven’t figured this out, then the joke is on you. 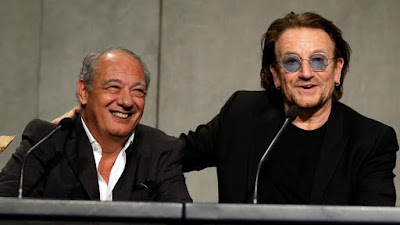 How long until Scholas Occurrentes makes the news for sex abuse?


‘Tikkun Olam’ Bono makes the world a ‘better place’ but the real “rock star” is the rabbi.

Posted by hereisjorgebergoglio at 2:26 PM