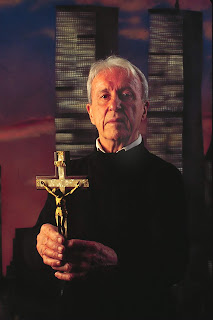 A symbolic photo taken of the triple-agent blaspheming ladies man and defrocked priest, Malachi Martin, on 23rd June 1996 in front of painting of the Twin Towers in New York City, New York.


Malachi Brendan Fitzmaurice-Martin was a defrocked Jesuit priest who left the Jesuit Order because they weren’t modernist enough for his taste and he had a predilection for affairs.  He sold his blather to everyone including the rabbis (whom he relished exchanging jokes with in Yiddish) that employed him at the Second Vatican Council.  A Judaic agent who sold his services to the highest bidder.  His work, done with malicious joy,  under Cardinal Bea and the liberal faction leading up to and at Vatican II was blackmailing conservative cardinals with long-closeted skeletons.  Martin received  fellowships not once but twice from the Guggenheim foundation to extol the Judaizing of the Church.  A conman extraordinaire who fooled gullible Catholics with storybook depictions of Black Masses in St. Peter’s Basilica and unbelievable tales of exorcisms.  Martin claimed to be anything and everything depending on his audiences from John XXIII’s confessor to being a ‘secret’ bishop.  On occasion the true Malachi would revel himself in interviews where he blasphemed Our Lord Jesus the Christ and stated he had, “done more for Catholic-Jewish relations than most people alive.”  If nothing else, Martin was an occult trickster.  How sad that people take seriously this flim-flam man who peddled snake oil and lies.

More will be added in the future... 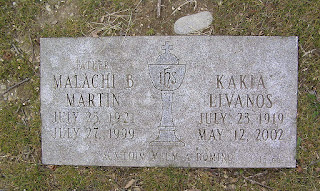 The headstone and graves of Father Malachi B. Martin & Kakia Livanos 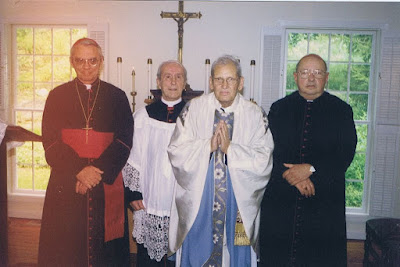