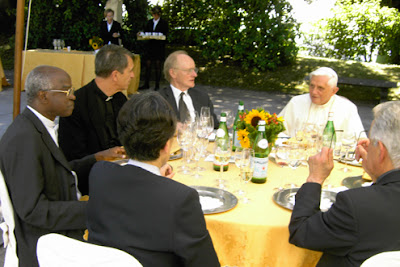 Robert Spaemann eating lunch with Benedict XVI at Castel Gandolfo during the Schülerkreis-Treffen (student circle) of 2-3 September 2006 with the topic of ‘Schöpfung und Evolution’. Spaemann also gave one of the lectures.


The late Robert Spaemann was ballyhooed in his obituaries as, “the Last Great Catholic Philosopher”, as “one of its greatest lights, and an eloquent defender of the traditional Mass and traditional Catholic doctrine, as well as of the perennial philosophy”, and “one of the most outstanding and formative figures of Catholic thought of the past 60 years.”   The most truthful thing in that previous sentence is that Spaemann was as ‘perennialist’ as occultist are.  He was a confidant of John Paul II and Benedict XVI. It was to Spaemann that Benedict XVI first showed his apostolic letter, ‘Summorum Pontificum’ in May 2007.  Spaemann in turn announced it to the world, through select media outlets, before it was promulgated by Benedict XVI on 7 July 2007 (777).

Little known is that Spaemann edited and wrote the foreword to Die großen Arcana des Tarot : Meditationen (Literal translation: ‘The great Arcana of the Tarot: Meditations’. It was published in English as ‘Meditations on the Tarot’ sans Spaemann’s foreword.)  In the German foreword, Spaemann speaks:  of alchemy; the Tabula Smaragdina; the power of 22 letters; states that the hermetic, gnostic, and theosophist traditions have enabled us to communicate the content of the Christian Creed; lauds German idealists like Hegel and Schelling for taking up occult traditions; explicitly endorses Hermeticism; says the Christians of the future will have to be those “gnostic, mature, enlightened Christians”; affirms Eastern Orthodoxy; and insinuates that to save the church, civilization, and world one needs to practice the ideas of the Kabbalah like Tikkun Olam.

Not only did he write the foreword and edit Die großen Arcana des Tarot : Meditationen, he made sure that John Paul II and then Cardinal Joseph Ratzinger received copies.  This is a work which teaches reincarnation as fact and among other things quotes Eliphas Levi approvingly!  Few care to acknowledge that Spaemann held occult views which he shared in common with John Paul II and Benedict XVI.

Below is Robert Spaemann stating to Pietro Archiati in December of 1987 that John Paul II believed in reincarnation and that this belief is compatible with being Catholic.

A “Philosophy Professor” convinced of reincarnation

John Paul II was a connoisseur of spiritual science of Rudolf Steiner. In his Polish time - when he was still a member of the Kraków theater group, he studied literature, and he wrote dramas — He regularly borrowed [a series of publications] from the librarian of a Polish anthroposophical branch working in the underground; he acquainted himself with Steiner's speeches and known dramatic arts and will also probably have studied Christological publications. The same Polish anthroposophist, who personally knew the branch leader in question and had already communicated these things to the author of these lines about twenty years ago, also told me about a photograph he himself saw which shows Valentin Tomberg's works published in German at the beginning of the 1980s on Wojtyla’s desk. As is commonly known, Tomberg curiously managed to convert to Catholicism after decades of studying and practicing anthroposophy. And for that reason he became particularly interesting and valuable to certain circles of the Catholic Church, as shown further below.

And also before the idea of reincarnation — a core idea in the spiritual science of Rudolf Steiner — Woityla did not recoil. That is unmistakably clear, and in the most direct way, from a conversation that the Catholic philosophy professor and co-editor of Tomberg's works, Robert Spaemann, had one day with John Paul II. At the request of the author, the former Catholic and present anthroposophist Pietro Archiati had recorded this conversation, which [record] he sent to him in summer of 1990 without reservations. We quote without change:


“At the beginning of December 1987 I had a conversation with Professor Robert Spaemann. It was on the day that I (about an hour earlier) had sent to Rome the explanation of my leaving the church. When I shared this message with Prof. Spaemann, he was very upset. To prove that I had taken the wrong step, he told me a private conversation he had had with the current Pope [John Paul II]. With that he said he would show me that the church was a lot more open and liberal than I wanted to impress on him. Immediately [afterwards] I wrote down this conversation in writing, so that my reproduction, if not verbatim, can at least be regarded as being very faithful.


Now I let Professor Spaemann speak for himself:


At the end of our conversation I [Spaemann] asked the pope altogether directly: “Your Holiness, what do you think of a Catholic, who is convinced of reincarnation?” He [John Paul II] did not want to answer, waited a bit and then he said smiling, “Ask cardinal Ratzinger, whom you know well. He is responsible for questions of faith!” But I [Spaemann] continued, “No, Your Holiness, I want you to tell me what you think about it.” There was repeated silence and waiting. After a few seconds, the Pope [John Paul II] said, “We must always follow the Scriptures. What do we find there? Do we find statements that speak clearly against reincarnation? No. Do we find statements that clearly speak for it? Also, no. Although perhaps the Scriptures are more likely to be interpreted in the direction of non-reincarnation.” Here the pope waited for a little while, and then he [John Paul II] continued, “I know a Polish philosophy professor who went to mass and communion every day and was very much convinced of reincarnation.”

Then he waited a few more seconds and with his Polish accent said, “Many questions ... few answers!”


Thus far the retelling of the the conversation. I still remember well how Spaemann imitated the Pope’s accent in the last sentence. Then Prof. Spaemann added that he knows with certainty from reliable sources that by “philosophy professor” the pope meant himself. He wanted to show me thereby how open the Pope is on this very important issue, and that there is room in the Church for people who, like me, are convinced of reincarnation.”

This account written of by Pietro Archiati was never disavowed by either Robert Spaemann nor John Paul II in their lifetimes even though both had ample years to do so.  This recounting was first published in a fuller version on 13 December 1992 in ‘Zur Gegendarstellung Prof. Spaemanns’ by Pietro Archiati in Das Goetheanum.

The public personas of Spaemann and Saint John Paul the Great are as staunch Catholics while the reality is the opposite. This shouldn’t be surprising because occultists are double-minded.  John Paul II in his apostolic letter ‘Tertio Millennio Adveniente’ wrote against reincarnation while he held a belief in it since 1938.  Spaemann was Mr. Catholic personified while he shared this occult belief. Both of these occultists tried to infect pewsitters with their double-minded psychosis in the hopes of bring about a Kosher Katholicism. 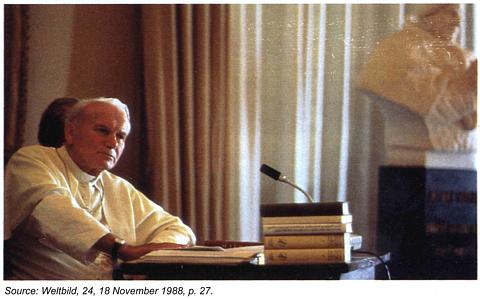 A reverse printed image of John Paul II sitting at his desk with 2 volumes of Die großen Arcana des Tarot : Meditationen (Meditations on the Tarot) as mentioned in the above quoted article.

Posted by hereisjorgebergoglio at 4:20 PM