Francis receives a copy of ‘The Jewish Annotated New Testament’ 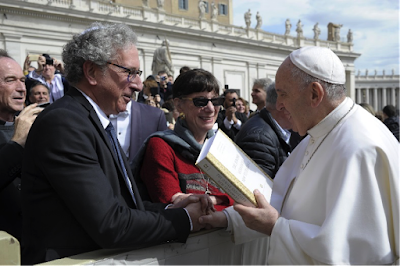 Amy-Jill Levine, Professor of New Testament and Jewish Studies at Vanderbilt University, and Marc Zvi Brettler, Professor in Judaic Studies at Duke University, the editors of the Jewish Annotated New Testament, presented the book to Pope Francis at the General Audience on Wednesday, March 27th. The following day, the work was discussed at a conference held at the Aula Magna of the Gregorian University, with responses by Professor Pino Di Luccio, S.J. and Biju Sebastian, S.J. The event was organized by Professor Jean-Pierre Sonnet, S.J., and Professor Luca Mazzinghi and co-sponsored by the Gregorian’s Faculty of Theology and the Cardinal Bea Centre for Judaic Studies.
The Jewish Annotated New Testament involves contributions of seventy Jewish scholars. It is the first major attempt of Jewish scholars to make the New Testament accessible to a Jewish readership, especially as an important source for the history of Judaism in the first century. At the same time, this work opens a Jewish perspective on the New Testament to Christian readers. It helps Christians to become aware of passages that are problematic for Jews. It also helps one to appreciate the implications of the Jewish identity of Jesus and the first believers in Christ. This work opens the door to respectful and enriching dialogue and is thus a major contribution to Jewish-Christian relations.
Amy-Jill Levine is currently Visiting Professor at the Pontifical Biblical Institute(PBI), where she teaches a course on the Parables of Jesus. She is the first Jewish scholar to teach in the field of New Testament at the Institute. She will also deliver a paper at the conference Jesus and the Pharisees, 7-9 May 2019, organised by Professor Joseph Sievers (PBI). Marc Brettler presented a lecture on “Religious and Critical Perspectives in Jewish Biblical Studies” at the PBI, hosted by Professor Agustinus Gianto, S.J., of the Institute’s Oriental Faculty. 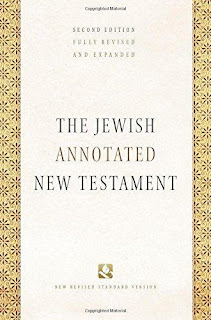 The Jewish Annotated New Testament was written by eighty Talmudic Jews (anti-Christians such as Susannah Heschel, Jacob Neusner, Geza Vermes). In it they cite the Talmud, the Kabbalah, the Mishnah, the Zohar, the Pirkei Avot, the Dead Sea Scrolls, and an assortment of other Judaic literature to explain that Jesus was nothing more than a simple Jew and that the anti-semitism of Christianity comes from the non-Jewish followers of Jesus because they twisted his words. It’s enough to make one want to barf.  As an example of the ‘scholarship’ in the book we quote from the preface (pp. xiii-xiv) of the book written by its editors, Amy-Jill Levine and Marc Zvi Brettler,

See there it is and not very subtly. Christians are too dumb to understand the New Testament and need the Talmudic Jews to explain it to them.  The “good news” of the gospels isn’t “good news” if it says something against the Jews!  Could you ever imagine the shoe being on the other foot and the ‘holy’ texts of Talmudic Judaism such as the Talmud and the Zohar being annotated by the Christians so it is pointed out that Talmudic Judaism is not only anti-Christian but also anti-goyim?  Don’t hold your breathe because it’ll never happen.  That being said, this book is right up Francis’ hasidic alley.  In two 2018 speeches to the Participants in the International Conference on the Responsibility of States, Institutions and Individuals in the fight against anti-Semitism and anti-Semitic hate crimes, to the European Jewish Congress’ conference “An End to Antisemitism!” , and in his preface to An End to Antisemitism! A Catalogue of Policies to Combat Antisemitism, Francis said as much, “Translations of the New Testament... need marginal glosses, and introductions that emphasize continuity with Jewish heritage of... Christianity... and warn readers about antisemitic passages.”  He doesn’t end there however, “As I have often repeated, a Christian cannot be an anti-Semite; we share the same roots. It would be a contradiction of faith and life. Rather, we are called to commit ourselves to ensure anti-Semitism is banned from the human community.”

Francis’ Novus Ordo religion doesn’t begin with the Gospel of John, “In the beginning was the Word, and the Word was with God, and the Word was God,” but begins with the Go-spiel of Elie, “In the beginning was the Holocaust...” Since the holocaust is his standard reference, he must combat anti-semitism (it matter not if it be imagined or real) at all times.   The motto of his noahide Holocaustianity is an inversion of the Jesus’ teachings and His Church’s.  It can be summed up as, ‘forgiveness is never attainable, reparations are never ending, and salvation is only for the chosen ones’.

Posted by hereisjorgebergoglio at 12:33 PM