One particular person stood out during the meet-and-greet, Rabbi Menachem Even-Israel, who came bearing a gift for Francis.  Rabbi Menachem Even-Israel is the son of Rabbi Adin Steinsaltz (aka Rabbi Adin Even-Israel — he changed his name at the suggestion of the Rebbe — Rabbi Menachem M. Schneerson) who Francis previously met in Vatican on 5 December 2016.  The day after meeting with Adin Steinsaltz, the rabbi suffered a stroke from which he never fully recovered.  His son Menachem is the Executive Director of Shefa (Israel Institute for Talmudic Publications) — Rabbi Steinsaltz's umbrella organization.  During the previous meeting Rabbi Steinsaltz gave Francis a copy of Excerpt from the Talmud Tractate Berachot which discusses the minutiae of the ‘Shema’ that Francis is obsessed about and the ‘Birkat Kohanim’ he has publicly performed.  It’s safe to say that Rabbi Steinsaltz sent his son as his emissary as he was recovering from the aforementioned stroke at the time.  The book which Francis is so happy to be receiving from Rabbi Adin Even-Israel is HaTanakh HaMevo'ar Daniel Ezra Nehemia and in Hebrew.   This leaves us at Call Me Jorge... with the thought that Francis was getting this book of Rabbi Steinsaltz’s because of their previous conversation.  Francis can read Hebrew and speak it too.  Also, Francis already has Hebrew books in his collection and has seen to it that the key documents between the Vatican, the Talmudic Jews, and the Holocaust (dating back to 1965) were translated into Hebrew as well as his book (containing blasphemies) with Rabbi Abraham Skorka. 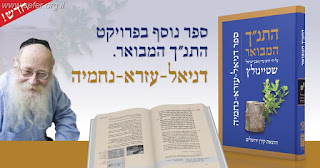 Advertisement for the book by Rabbi Adin Steinsaltz. 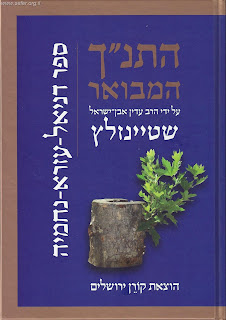 
Here’s the publisher’s description of the work:

“Like his edition of the Talmud, The Steinsaltz Tanakh is a work of monumental and prodigious brilliance that took years to complete. Fueled with a lifelong mission to make learning accessible to Jews of all backgrounds, Rabbi Steinsaltz included a treasure trove of information to make the books of Tanakh clear, concise, user friendly, and above all, enticing students to delve even deeper.

Now you can learn Daniel, Ezra and Nehemia with Rabbi Steinsaltz’s clarifications on King David’s verses, including scientific explanations, background notes on flora and fauna, historical information, and much more.” 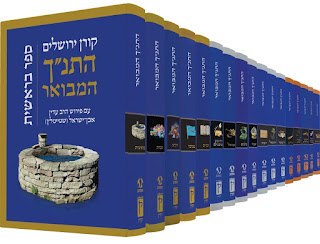 
Rashi also wrote commentary for what became the standard Talmud still used today.  He’s another who believes all sorts of blasphemies about Our Lord (such as believing Jesus to be in hell for harming Israel) and the Blessed Mother. His commentaries are one of the foundations of Talmudic Judaism which seeks to nullify the Word of God and twist it into the desires and fantasies of the rabbis. Rashi was very influential among ‘Christian Kabbalists’ (CMJ uses this term only because historians do) as well as the Franciscan monk, Nicholas of Lyra, who copied from him copiously and spread his ideas. One of the most notable persons who picked up Rashi’s ideas from Nicholas of Lyra was Martin Luther.  As we wrote in the post, Talmudic Jewish Supremacism,

“Rashi, a rabbi from 11th century France who is highly esteemed by Talmudists as being an elite practitioner of PaRDeS. The technique of PaRDeS “is a rabbinic literary invention, whereby each word of the Torah has four levels of interpretation: the literal meaning, peshat, a more subtle or hinting reading, remez, a creative commentary, drash, and a totally hidden or mysterious meaning, sod.” In other words Rashi was great at nullifying what the Tanakh (Hebrew Bible) says and twisting it through PaRDeS to what the rabbi wanted it to say.”

We know from a past interview with Rabbi Abraham Skorka that Francis studied Torah with the rabbi.  Francis’ favorite figure is Abraham because he questioned God and challenged God.  After all, it should become clearer why Francis relished telling children that he had “the audacity to rebuke Jesus”.  Lastly, there is the big problem that the Tanakh (aka Hebrew Bible or Masoretic Text) wasn’t composed until after Jesus the Christ ascended to heaven and the destruction of Jerusalem happened!


Sometime around A.D. 95 Akiba ben Yosef (aka Rabbi Akiva) drew up the canon which would became the Tanakh.  Rabbi Akiva believed Bar Kochba was the messiah.  He had hired a man named Aquila to translate from Hebrew to Greek, the rabbinical version of the Old Testament which included the Halakahic laws.  Let’s see a rabbi who believes in a false messiah, the insane man-made Halakahic laws, and set out to write his canon to destroy the credibility of the Gospels — all of which became the foundation for the Tanakh... sounds like a work which is right up Francis’ alley!  It’s no wonder that Francis is reading this book and that L'Osservatore Romano recommended daily Talmud and Tanakh lessons back in 2013!

“The Masoretic text of the Hebrew Bible was consolidated in Tiberias in the 10th century and codified by Aaron Ben Asher... The final stamp of sacred authorization was given to the Masoretic text by Maimonides.”

Bible Studies / The Things That You're Liable to Read in the Bible, Haaretz, (3 April 2011)

Look it’s another one of Francis’ favorite Talmudic Jews, the Rambam (aka Moses ben Maimon, Maimonides).  Francis in 2004 stated he admires Maimonides’ open attitude towards other faiths.  What was Moses Maimindes ‘open attitude’?  “Maimonides is on record, in his commentary on the Mishnah, calling for the execution of all Christians and hoping that the name of Jesus, the “name of the wicked, shall rot.””  Four years later the Talmudic Jews in Argentina would award Jorge Mario Bergoglio with the Maimonides Award for Inter-religious Dialogue.

As we have covered here recently, Francis isn’t ignorant, in fact he is the opposite being very well read.  He has exhaustively studied and understand all facets of what he teaches.  Conservatives in the religious media are often puzzled at why Francis teaches un-Catholic beliefs in his homilies, catechesis, interviews, and speeches.  They overlook the elephant that is standing in the room because it is too simple an answer.  This isn’t difficult to figure out, it’s quite easy.  Go to the Vatican’s website and check the “Bollettino quotidiano” to find out who will be visiting Francis that day.  Next browse over to “Servizio Fotografico Vaticano” and peruse the photos from the visitors to see what books were given to Francis.  Lastly, look up the books and read them to compare with the ideas Francis has been sharing.   The one thing which turns up time and time again is a rabbi bearing a gift of anti-Catholic books which Francis happily accepts. 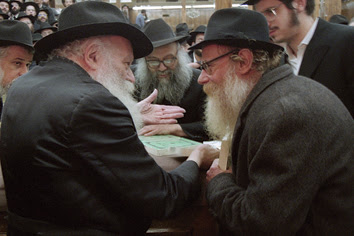 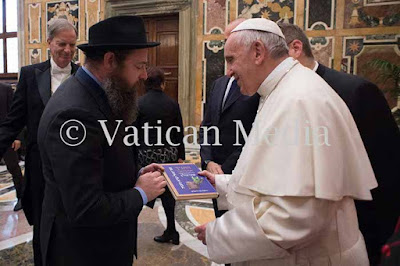 As one can plainly see Francis is interested and glad to be receiving another book by Rabbi Steinsaltz.
Posted by hereisjorgebergoglio at 3:46 PM