Why does Charles Coulombe frequent a Theosophical Gnostic Lodge?

...of the same Gnostic bishop who signed
the incorporation documents of
Coulombe’s Feeneyite
St. Benedict Center?
Charles Coulombe over the years can often be found at the Besant Lodge of Hollywood. It is a theosophical gnostic lodge run by Charles’ good friend and cousin, the gnostic bishop Stephan A. Hoeller. Many a time he is found there on Friday nights to participate in tarot card divination or give a talk, both of which are sponsored by the Theosophical Society – Besant Lodge of Hollywood. He also spends his Halloweens partying at the Besant Lodge and has celebrated at least one birthday there.
When Coulombe or anyone else enters the Besant Lodge before they get through the front door, there is a placard to the left which clearly reads, “Hollywood Theosophical Center Besant Lodge”. It is even illuminated by its own light. This can be seen from photos posted online.
(click images to enlarge) 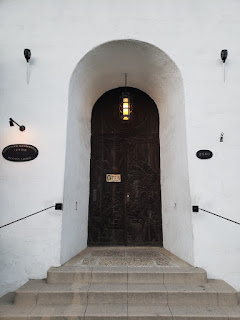 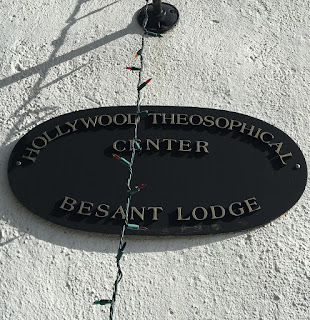 source: facebook@Michelle Bitting, 5 January 2020
The same entrance placard is visible in the following photos from 2004, 2013, and 2017.
Charles Coulombe portrays himself as an erudite Catholic but ignores the Holy Office’s response concerning Theosophy, “Whether the doctrines, which today are called theosophical, can be in harmony with Catholic doctrine; and thus whether it is permitted to join theosophical societies, attend their meetings, and read their books, daily papers, journals, and writings.— Reply: In the negative in all cases.” 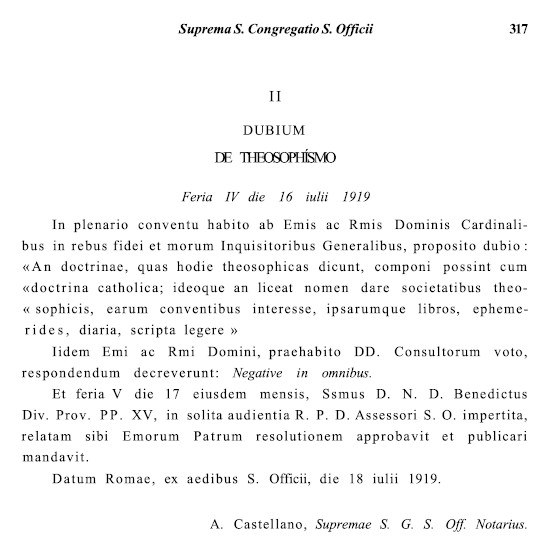 source: p. 319, Acta Apostolicae Sedis, ASS 11 [1919].
The Gnostic Society’s brochure below (see 2020) clearly reads, “Friday Evening Lectures at 8:00 P.M., Co-Sponsored by The Theosophical Society and featuring Dr. Stephan Hoeller” which is in agreement with The Gnostic Society Ecclesia Gnostica + An Open Sacramental Gnostic Church in Hollywood, California’s website that states, “Lectures are sponsored in part by the Theosophical Society – Besant Lodge of Hollywood.” These lectures Coulombe gave and attended sound exactly what the Holy Office forbid Catholics from attending.
There is good reason the Holy Office has ruled on this matter. Below is an excerpt from an LA Weekly cover story on Stephan Hoeller, which he was so proud of that he posted it in its entirety to one of his websites.

The Hollywood Ecclesia Gnostica filled with incense and plainsong as Hoeller entered, wearing his lavender skullcap and preceded by the cross, just as it does now each Sunday morning in its new (and considerably more spacious) digs in Atwater Village. The Mass proceeds as it has for centuries with a Collect (the call to worship), a Lesson, a reading from the Gospel, at first glance distinguished from the ritual of Saint Peter’s Church only by the presence of both male and female clergy. But if you listen well, odd things begin to present themselves to your ears, as if the well-known liturgy were mutating in the heat of the sacrament.

Here, for instance, is the Gnostic take on the prayer known to all Catholics as the Hail Mary (“Hail Mary, full of grace . . .”):

“Hail, Sophia, filled with light, the Christ is with Thee. Blessed art Thou among the Aeons, and blessed is the liberator of Thy light, Jesus. Holy Sophia, Mother of all gods, pray to the light for us, Thy children, now and in the hour of our death. Amen.”

On any given Sunday, such new strains of liturgical DNA emerge from the Mass, with an effect that’s a good, working definition of subversive. Today, four Sundays after Easter 2005, Bishop Hoeller opens the service with a whispered invocation that might almost slip the radar of an inattentive Grand Inquisitor:

“In the name of the unknown Father of the universe, in truth Mother of us all.”

Some 40 congregants have assembled, nearly two-thirds of them female. Bishop Hoeller’s flock has grown, and although the numbers are small, it seems quite reasonable to think they’ve been debited from Cardinal Mahony’s side of the ecclesiastical ledger. It’s also impossible not to wonder how much of this spiritual gender gap might be owed to what Time magazine will sooner or later dub “the Da Vinci Effect.”

The scriptural reading is from the Gnostic Gospel of Saint Philip, and the passage concludes this way:

“God created man and man created god. So it is in the world. Men make gods and they worship their creations. It would be more fitting for the gods to worship men.”

In a brief homily following Holy Communion, Hoeller, seated against the deep, star-sprinkled blue of the chapel’s rear wall, offers his take on this blasphemous bit of scripture, quoting Voltaire’s “God created Man and Man returned the favor,” and arguing, from personal experience, that no greater proof of mankind’s knack for blind worship exists than the events of the “Centum Terribilis,” the 20th century.

If the above isn’t a total inversion and mockery of the Catholic Mass, what is?
A few more photos for the doubters that these rituals take place in the same room which Coulombe celebrated his birthday, read tarot cards, celebrated Halloween with occultists, and gave lectures  sponsored by the Theosophical Society. Notice the stairs, stage with green curtains, and stained glass windows. 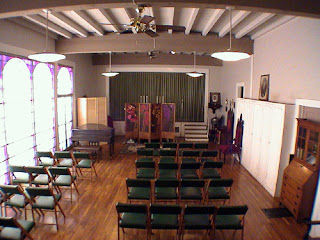 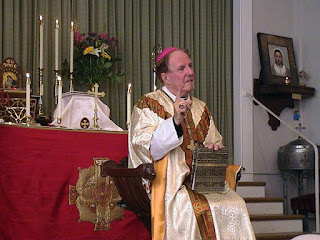 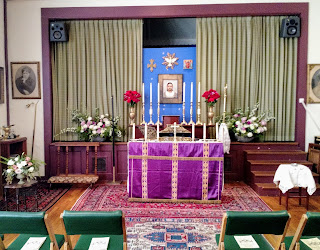 Bishop Stephan A. Hoeller and members of his Ecclesia Gnostica during their occult services. 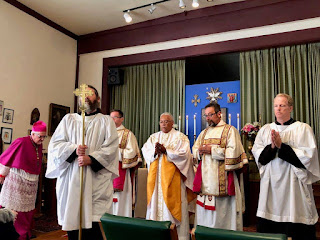 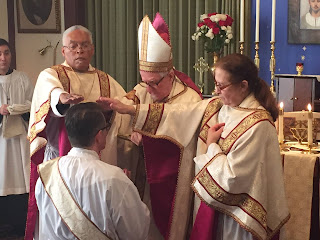 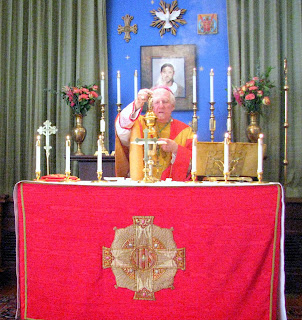 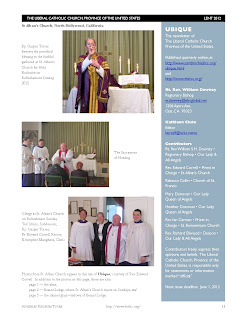 “In it's Theosophical incarnation, Besant Lodge has welcomed lecturers worldwide, including; Aldous Huxley, Gerald Heard and Manly P. Hall. Today the newly renovated Besant Lodge continues all of these rich traditions by hosting unique speakers, artists and events from around the globe.”

What an absolutely terrible and diabolical place to frequent.
The Theosophical Society – Besant Lodge of Hollywood also happens to connect to the home of Stephan A. Hoeller.

“The living room is a library stocked with old, hardbound books that reflect a lifelong devotion to Jung and a youthful embrace of Theosophy and Freemasonry. In a room that honors French existentialists, psychedelic pioneers and even the institution of gay marriage”

One more time, we ask why would a Catholic set foot in the Hollywood Theosophical Center – Besant Lodge? Celebrating a birthday doesn’t cut the mustard... Neither does attending Halloween parties... Nor giving lectures... And tarot card divination is an absolute no! Which leads us to back to ask why did the theosophist freemasonic gnostic bishop of the Hollywood Theosophical Center Besant Lodge sign the incorporation documents and presently serve as the Secretary of the Feeneyite St. Benedict Center - West (California) that Charles Coulombe co-founded?

1990 — Charles celebrating his 30th birthday at the (Annie) Besant Lodge. 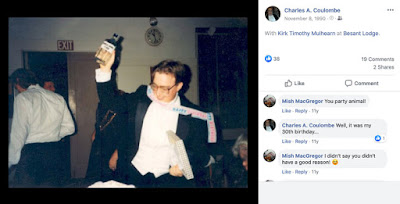 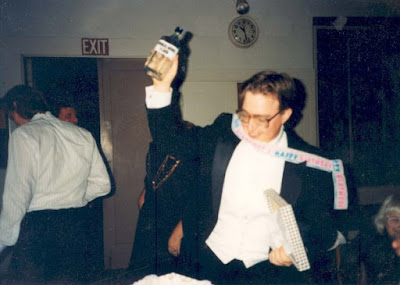 2016 — Halloween party at the Besant Lodge 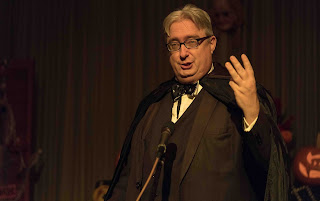 2017 — The Gnostic Society brochure reads, “Our good friend R. Charles Coulombe’s book on the Grail, "The Catholic Quest for the Holy Grail" is about to be published; watch for book signing event.” 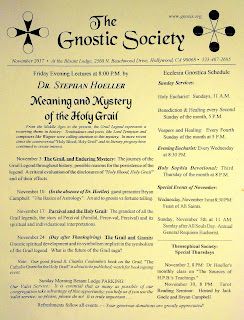 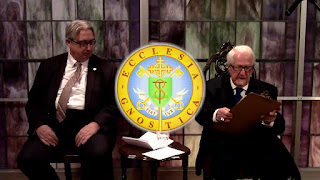 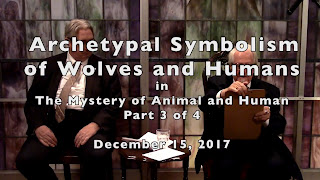 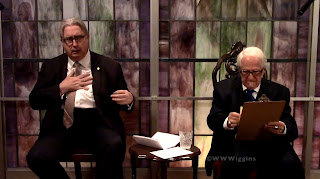 *It is interesting that this video has been removed from youtube in the last year since the videos of tarot card divination by Coulombe and Hoeller appeared.
2019 — Photo of Charles Coulombe from 11 January 2019 from Friday night tarot card reading 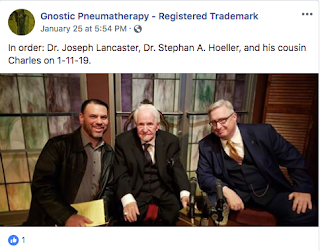 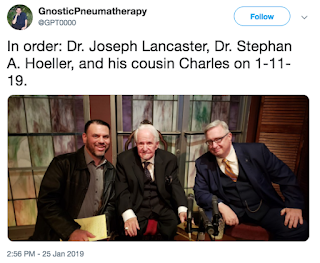 source: 2018 Lecture Schedule, The Gnostic Society
2018 — Monarchists and Occultists give Charles a going away party, “I shall so miss him at the annual Halloween party at Besant Lodge. Big sigh.” 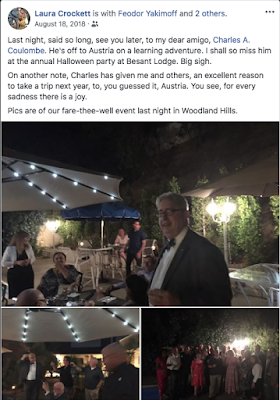 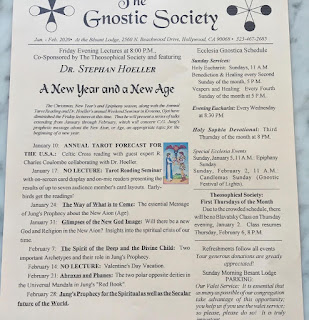 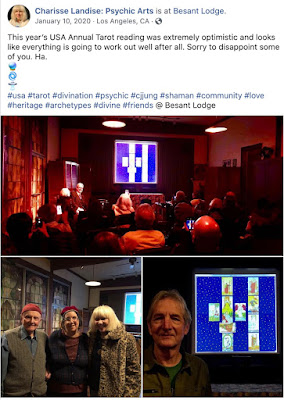 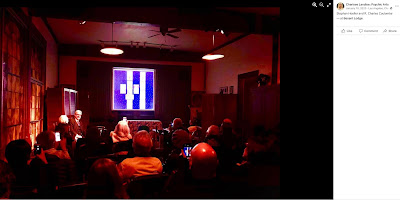 Who are these two laughing at in the theosophist lodge?
Posted by hereisjorgebergoglio at 7:51 AM