Posted by hereisjorgebergoglio at 4:22 PM 5 comments:

Below is a recent exchange of tweets between Alistair McFadden and Brother André Marie (the Prior of St. Benedict Center in N.H., real name Louis Villarubia): 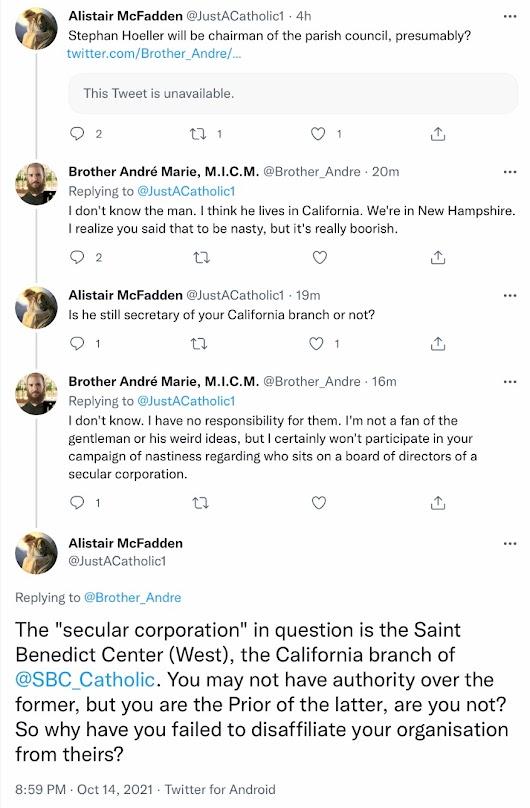 Brother André Marie writes, “I don’t know. I have no responsibility for them. I’m not a fan of the gentleman or his weird ideas, but I certainly won’t participate in your campaign of nastiness regarding who sits on the board of directors of a secular corporation.” (Bold is CMJ's for emphasis.)

The “gentleman” Brother André Marie is referring to none other than Stephan A. Hoeller, a freemason theosophist gnostic bishop, and the “secular corporation” he is referring to is the Saint Benedict Center - West. 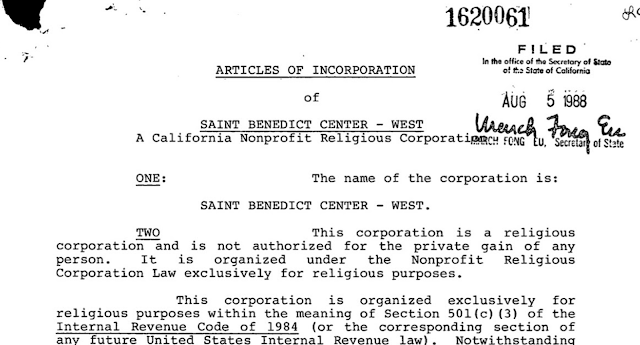 The State of California - Franchise Tax Board recognizes the Saint Benedict Center - West is a religious corporation too. 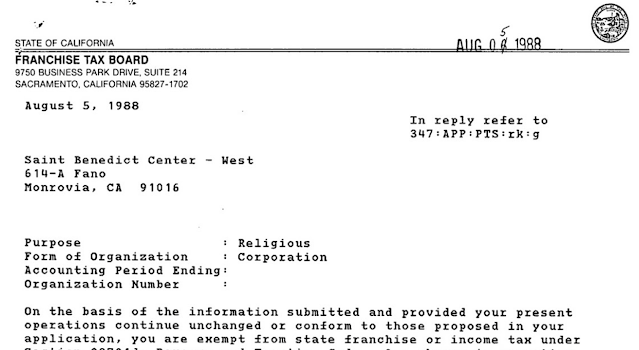 It should come as little surprise to anyone who has been paying attention, that Brother André Marie refers to the religious corporation of Saint Benedict Center - West as “a secular corporation” as Brother André Marie, the Slaves of the Immaculate Heart of Mary in Richmond, New Hampshire and their corresponding Saint Benedict Center were the ones who rehabilitated Coulombe’s image the first time he was busted by the SSPX as a Feeneyite occultist in the 1990s.

It‘s obvious the entire purpose of calling the Saint Benedict Center - West, “a secular corporation” is to deflect attention away from the fact that the Feeneyites are intimately connected to the grand poobah of gnosticism - Stephan A. Hoeller; a Feeneyite brother regularly divines tarot cards in a theosophical lodge with Hoeller; and he also participates in activities of the Gnostic Society in Los Angeles run by Hoeller. Anyone who points this out is, “participat[ing] in [a] campaign of nastiness”!
One only need look to the example set by the excommunicated Catholic priest, Leonard Feeney, to see that truth and Feeneyism are diametrically opposed.
As Alistair McFadden tweeted, “Someone's telling porkies...!”
Posted by hereisjorgebergoglio at 5:54 PM 3 comments: